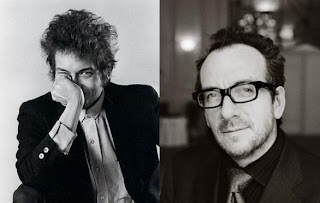 So, I'm sitting here at Sokol Underground rather than a mile or two down the street at Qwest Center seeing Bob Dylan and Elvis Costello. I know. I suck. And I had tickets, too. It's a long story but I ended up selling my tickets and then I committed to working the show at Sokol. I thought I had made my peace with the decision, but I guess that was a tad premature.

Instead, I am working the door at Sokol. I know nothing about the bands tonight except that they are local, and it is a Halloween themed show. Could go either way. I cannot let myself think about Elvis Costello. No Elvis. No Elvis.

I definitely should have taken a nap this afternoon since I got off of work a few hours early. I'm really going to be feeling it by night's end. It has been a long fucking week. But I can take it!

Catch this week's 30 Rock? Shit, I have already watched it twice. Go the NBC site and watch it immediately if you haven't seen it yet. The show gets funnier every week. I love The Office, but I'm sorry, 30 Rock is funnier. It is also in its infancy, and many of the best sitcoms don't fully hit their stride until the 3rd or 4th season. Give this show another year or two and it will be the nation's "water cooler" show (or whatever dumb buzz term is used at that time).

Since NBC posts the entire show on its website, there is not much need to search YouTube for clips. But I did want to post this one where Jenna appears on Hardball to talk politics with Chris Matthews and Tucker Carlson. It's priceless...