Californication Much Better as a Show Than a Song

Popoholic is proclaiming that Californication is the best show on TV. I'm not quite there yet, but I will say it is one of the best (Dexter may actually be the best, but that is for another posting). It just got renewed for another season, so that means the entire show will not have to be wrapped up in next week's season finale. And there is a lot to wrap up!

Mia -- the teenage daughter of the fiancee of Hank's (David Duchovny) ex-girlfriend who Hank inadvertently slept with before realizing who she was -- has officially gone crazy. She took the only copy of Hank's new manuscript to his agent and is passing it off as her own. She views it as payback - he slept with her and then never called, she sells his best work in decades as though it were hers. She seems pretty remorseless when confronted about it by Hank. 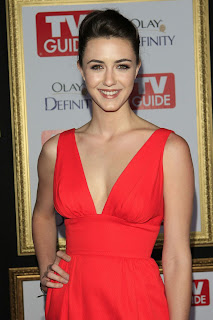 The tricky part is that the book is about an older man who sleeps with a teenager who happens to be the daughter of the man who is marrying his ex. Since this really did happen to Hank, if he makes a huge issue out of authorship of the manuscript, he will be forced to admit that he slept with Mia. The consequences could be devastating, both on a personal and a legal level (Mia is only 15). It could potentially destroy his relationship with his own daughter. What will he do? Hank's agent, Charlie, recognizes the writing as Hank's, but acknowledges the difficult situation he is in.

The previews of next week's show don't reveal too much other than at the wedding of Hank's ex, Karen, and Mia's father, a drunken Mia stands up during the ceremony and makes an announcement. Could be the perfect end of season bombshell. I have my doubts as to whether Karen's wedding will actually happen. I still think she and Hank should get back together. However, it all depends on what Mia actually reveals.
Posted by Dave Splash