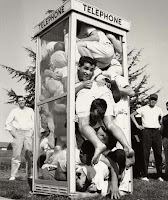 Yeah, so I made it down to the Bright Eyes show at Waiting Room last night for 1% Productions' 10th anniversary celebration. Decent show - very packed. I got there about 9:30 and the place was already overflowing with people. It wasn't "uncomfortable crowded" but it was the most full I have ever seen Waiting Room. This might have to do with all of the additional equipment and whatnot from Bright Eyes that was using all of the space to the left of the stage. That is usually open, and therefore, filled with people. Last night, obviously, it wasn't.

I missed pretty much all of Flowers Forever, but I am not too broken up about it. I've seen them before, and was not overly impressed. Never been a Tilly & the Wall fan, so anything associated with them starts at a disadvantage with me. I caught Simon Joyner's set. No comment. Someone overheard me asking, "Where is a sniper when you need one?" during the show, so I guess that sums up my feelings on Joyner's music (of course the sniper would just be using tranquilizer darts -- no one needs to be killed, of course).

After a rather long set change, Bright Eyes came up and played a pretty good, pretty rocking set (as rocking as Bright Eyes gets). I was confused as to who was on stage with Conor. I barely recognized anyone from this version of the band. He had David Rawlings on guitar, who I know frequently works with Gillian Welch, but I have no idea about anyone else. Speaking of Gillian Welch, I thought I spotted her walking around in the crowd. It was her, and she later came up on stage and did a few songs with BE (most notably "Classic Cars").

I left before the encore because I was beat, but according to Omahype, one of the encore tunes was a cover of Tom Petty's "Walls" with Gillian and Simon Joyner helping out. I would have liked to have seen that, actually. Oh well...

UPDATE: Pitchfork has photos from the show.
Posted by Dave Splash

Sounds good to me...too bad I was a bit of a distance from Omaha or I woulda wanted to be there.. I kinda got a thing fer Gillian's voice...and with Conor...sounds like a good combo.

She's here in Omaha all the time and stays at Conor's house. It was nice seeing her on stage with the band. I wish I would have stayed to hear that Petty cover, though.