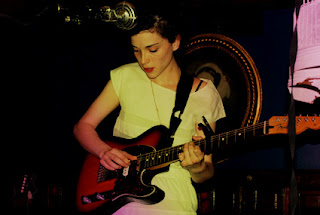 So I went to the National/St. Vincent show last night, and I am pleased to report that I have a new artist to get excited about! I love St. Vincent! She (Annie Clark) was unbelievable. In addition to being totally adorable, Annie puts on an incredible one-woman show. She plays guitar and sings, while at the same time, she stomps on some pad that acts like a drum, and she has keyboard and synth parts programmed to play along with her. It was thoroughly entertaining. She is a great guitar player, as well. She only really wailed a couple of times, but that is to be expected. Her music is not exactly the screaming guitar solo type of stuff.

St. Vincent comes across as something of a combination of PJ Harvey and Kate Bush, while sounding very little like either one individually. Omahype has posted a few mp3s from the new St. Vincent CD, Marry Me. Check them out and decide for yourself (then buy the freakin' CD). I have no doubt that she will be featured on my next podcast.

A major highlight of the show was Annie's solo rendition of The Beatles' "Dig a Pony." I found this clip of Annie playing the song while riding in the back of a cab.


Another clip of her performing "Bang Bang": 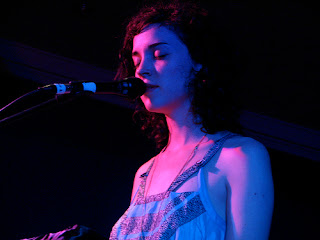 After watching St. Vincent's all-too-brief set last night, The National just didn't seem that impressive. They were good, but I ended up leaving a bit early. I look forward to seeing a headline set from St. Vincent sometime in the future.

UPDATE (9/21): Pitchfork has some photos from the show taken by my friends at Paparazzi By Appointment.
Posted by Dave Splash