For today's Factor, I am going the celebrity route. A number of actresses take it off in movies, but to my knowledge, only one has done it on network TV (unless you count Janet Jackson's wardrobe malfunction), and that is former NYPD Blue star Charlotte Ross. 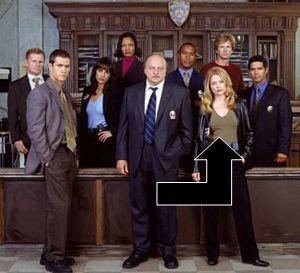 As Detective Connie McDowell, she went the frontal nude route in a scene where her boyfriend's young son accidentally entered the bathroom when she was getting out of the shower (pics here, NSFW). That was pretty different for TV, to say the least.

Charlotte has gotten naked again, but this time for a cause. She appears in a new campaign for People for the Ethical Treatment of Animals (Peta) along with a number of other actresses and models. A collection of photos from the campaign can be found here. (NSFW)
Posted by Dave Splash