My Week On The Couch

I was laid up for a few days with some type of stomach virus, so I had nothing to do but watch TV. I caught a few of the new season premiers (The Office) and some show premiers (Bionic Woman), as well as the 498th (or so it seems) Democratic presidential debate. Here's my report. 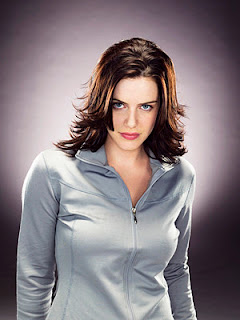 I wasn't sure what to expect with the remake of The Bionic Woman. As a kid in the 70s, I used to love The Six Million Dollar Man. It was my favorite show. I had the cool doll where you could roll up the skin and see the bionics, and you could look through the back of its head to use the bionic eye. It was a great toy. Anyway, I didn't like the original Bionic Woman too much back then because it didn't feature Lee Majors, and he was my favorite when I was about seven years old.

I checked out the new show, and I actually liked it quite a bit. They changed up the storyline from the original, so there is no actual "bionic man." The whole bionic thing is still a secret government program, but the Jamie Sommers character was unaware of it. She is just a bartender who is dating a guy who she thinks is a college professor. She got in a car accident, and her boyfriend (who runs the program) had the bionics installed while she was recovering. The twist is that Jamie is not the first person to have these installed. The first "bionic woman" went nuts and they tried to kill her. She survived, and is the one behind the car accident that injured Jamie. Her boyfriend was the intended target.

The original bionic woman is played by Katee Sackhoff, who also plays Starbuck on the new Battlestar Galactica. I noticed another BG star on the show as well, but only for a brief minute (the Chief played a prison guard in a very brief scene).

I think this show holds some promise, and it is different enough from the original to get new fans. I don't know what (if any) the connection it has to Battlestar Galactica, but both shows have done a good job re-envisioning a classic 1970s show.

The season premier of The Office was a definite winner. No reason to describe this show because you, no doubt, have already seen it. Rashida Jones who played Karen is gone. She and Jim broke up. That's too bad, as I liked her a lot. Jim and Pam are now together, which is to be expected after all the drama of the last few years on the show. Ryan (the sales trainee who never got any sales) got the promotion that Michael wanted and is now at the corporate office. I always felt he was a minor character anyway, so if he is on less, I would not mind. Everyone else is exactly the same, and the hour-long premiere episode was hysterical from start to finish.

I love all the Law & Order shows, and I caught the season premier of L&O SVU this week. The episode was pretty good. Nothing major to report except that for a brief time the Captain was demoted, and Munch (Richard Belzer) was put in charge. Oh, and Mariska Hargitay cut her hair again, and she is one of the few women who look better with short hair.

The cliffhanger from last season's finale of C.S.I. (the original of course as all the others suck) was resolved with (you guessed it) Sara surviving her abduction. Since everyone knew she wasn't going to die, it made the show a little less exciting. Still, it was a decent episode, which utilized a non-linear technique for filling in the details of what had actually happened to Sara during her ordeal. Naturally, she made it. The truth about her relationship with Grissom came to light during all of this, and the preview for next week's episode makes it clear that it will be a problem for both of them in the future. I'm going to keep watching this show because the production values and the acting are still first-rate. However, with all of the C.S.I.-type shows out there, the genre is getting a bit played out, and I'm starting to get tired of it all.

Lastly, I wanted to just say a few words on the most recent Democratic presidential debate. I still have not settled on a candidate; and since I live in Nebraska, my choice will pretty much be made for me long before I ever get a chance to vote. I have said this before, and I will say it again, there needs to be some weeding out of the candidates in these debates. I don't know what the threshold should be, but the DNC needs to determine some way to define the reasonable viability of the candidates. Some people (Gravel, Kucinich) need to be removed. I am tired of 30 second responses, and having the serious contenders, barely able to get a word in because the moderator needs to include everyone.

Obviously, I would vote for any of the Dems in a general election. The Republican candidates are all unacceptable. While Democrats debate actual issues that effect people's lives, all the Republicans talk about is who would torture more, who would make Guantanamo bigger, and who could start the most wars. I get it, tough guys, you all have small dicks and live in fear of Muslims, so you talk extra tough. I'm looking for a little bit more from a president.

Hillary Clinton may not be my "dream candidate" but I am becoming more and more comfortable with the idea of her in the White House. I don't see how anyone will beat her in the primaries, and, honestly, the Republican party is so devoid of anything resembling original thought, that I'm not sure any of them would even stand a chance in the general. I'd rather see someone like Al Gore or Joe Biden in the top spot, but I could definitely live with Pres. Hillary Clinton. I'm over the Obama thing. He's not enough of a fighter for my taste. I don't get the sense he wants it bad enough. He seems like a great guy, but maybe his future holds a leadership place in the Senate...or maybe not. He could be a flash in the pan.
Posted by Dave Splash

I thought The Office was funny from start to finish. I loved the Rabies quilt!

You know, I've been pretty easy on Hillary. But I am kind of disturbed she voted to give Bush this first step toward war in Iran. I know the Dems are paranoid about looking weak but sometimes the intellect has to trump testicles (or whatever produces her testosterone).

Kid Sister to a Comedian said...

About SVU...I missed the episode!
Oh I think I'll just scream, cross my eyes and bonk my head in the wall!! Oops, my prozac must not be working. Back to my chocolate fix.

And my big brother was put in charge?!?! Bout time Munch got some credit around there.

Last year USA would re-air the same episode later on in the week, but they're preocupied with getting the contract for CI. L&O:CI is getting better while L&O original is loosing some of its savour.

But I'm so peeved at myself for missing the SVU premiere. and now I have to wait til who knows when...

thanks for posting this.

Glad I could help