Laura Ingraham Is a Cry Baby 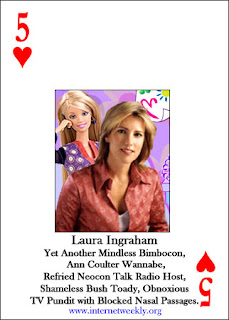 I just watched a hysterical interview with Laura Ingraham on Hardball. Chris Matthews has always bent over backwards to be nice and complimentary toward Ingraham, and to my knowledge, he has never been anything but positive.

On today's show, Ingraham was invited on to discuss the MoveOn/Petreus controversy and she came out in full attack mode. The first words out of her mouth were an attack on reporter David Schuster. She said he was "biased" (typical right wing move to avoid discussing issues) against Bush and freedom. How adult. Throughout the appearance, she kept getting all of her RNC talking points spit back at her by Matthews. Funny how saying that the "democrat party" hates freedom doesn't get such a warm embrace anywhere besides Fox News.

Any analysis of the debate would have to give Matthews the upper hand. He whipped her. To show how much of a sore loser she is, Ingraham whined at the end of the interview, "I like your brother better anyway." Matthews' brother is a Republican from Pennsylvania. It must be really difficult to keep defending the worst president ever. I suppose it's easier when you never speak to anyone with a different opinion. Perhaps Miss Laura should stick to her wingnut radio audience.
Posted by Dave Splash

You are nutso cigar! Laura's my heroine. She's got it all over Matthews both in the IQ department and personality. Why don't you read up on her journey in life and educate yourself a little. She's got it together!