Even Jenna Bush Thinks Her Dad Is a Dope 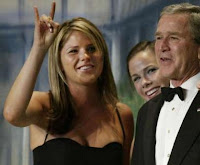 First daughter Jenna Bush (the blonde one) has come out publicly against the Bush Administration's ridiculous "abstinence only" educational programs. She told ABC's Diane Sawyer that she cannot support daddy's plan for sex ed, "No, I mean, not at all, first, because I’m not part of the administration. You know, I’m just my father’s daughter. … I think that when we’re talking about keeping kids safe, and we’re talking about Ana and other kids that are living with HIV or other STDs … kids need to have education; they need to be educated in order to make the right decision for themselves."

A sane member of the Bush family. Will wonders ever cease?
Posted by Dave Splash