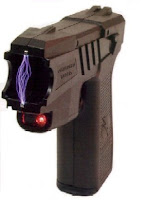 The more I see that video of the guy in Florida tasered by the cops for being a little obnoxious during a Q&A with Sen. John Kerry, the more I am starting to get really worried about where things are going in this country. I do not view this as an isolated incident, by any means. Police are using force -- often excessive force -- on an increasingly frequent basis. I, myself, have witnessed it twice in recent months.

In one incident, I saw no less than seven of Omaha's finest being used to restrain one, medium sized man. He was eventually tasered -- while being held down on the ground (sort of like what happened in Florida). This incident occurred after a Flaming Lips concert (and the Lips have some of the post passive, non-violent fans of any band out there). I admit that I did not see whatever caused the guy to be restrained in the first place. But the guy was clearly down. He had seven cops on top of him -- some of them hitting the guy with their clubs -- and he was cuffed. Why the cops kept hitting him, and eventually tazed him, is beyond me. This was witnessed by dozens of people and anyone who questioned the police were told to leave or be arrested. I was shocked, but I admit, I did nothing. 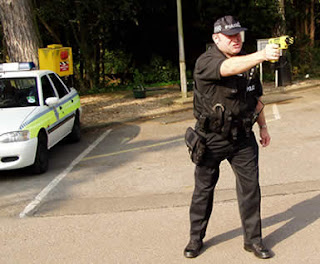 The second incident occurred when a guy who started a fight in a bar got his ass kicked by the person he started a fight with. Bloody and bruised, said guy stumbled out of the bar, found a phone and called the cops. The police arrived and attempted to look for the fight's winner. While one cop searched the bar, his partner stayed outside and watched the car. When a guy ran out of the bar and someone yelled "That's the guy" the outside cop pulled out his taser gun (the kind with the darts on a string) and shot the guy. He didn't even attempt to chase the guy! His first instinct was to shoot.

I feel that if I have witnessed two incidents like this (and I am a white, middle class, suburban type, age 36) then this kind of thing must be out of control in other (*wink *wink minority) neighborhoods and among younger people. I certainly do not want to paint all cops with a broad brush, but does it seem to anyone else, that too many cops are coming unglued across America lately? Doesn't it seem that this behavior is encouraged by the conservative nature of our society? And why is not okay to question the actions of the police? Have you ever seen anyone besides a civil rights activist on television questioning or making allegations of police brutality? Why is everyone afraid of criticizing the police? Police have almost unchecked power, their testimony is given higher importance and credibility in court proceedings than yours or mine, and they are rarely held criminally liable for their actions. If a cop wants to cause a problem for you, it is almost impossible to anything but sit back and take it. They can take you to jail and ruin your life. You can do nothing to them even if it is proven you did nothing wrong in the first place. Maybe you were asking for it? Or maybe you just didn't show enough respect to the badge.

You will never, ever see anyone in law enforcement condemning the actions of one of their own. I just watched two such people (one a former cop, the other a former FBI agent) on MSNBC claiming that the tasered guy in Florida wanted to get assaulted in that way to get attention -- that he told people to film him because he was about to do "something." No proof was offered, nor was it asked for. It was just accepted as fact, and is now free to be used repeatedly, in a disingenuous effort to show "both sides" of the issue.

What is almost as bad is how the right wing in the media and the blogosphere are attempting to make this political -- and to attack John Kerry (the right's 3rd favorite whipping boy behind Bill Clinton and Hillary Clinton. - I think Kerry has moved up and taken Ted Kennedy's old #3 spot. I guess Teddy isn't as relevant these days to the winguts) in the process. Yesterday on Tucker, show namesake Tucker Carlson all but called John Kerry a fascist because he didn't personally jump in between the cops and the Florida provocateur. He blamed Kerry for allowing the incident to happen, and for not screaming into his microphone (a la Howard Dean) for the cops to stop torturing the guy! It's Kerry's fault! Liberals hate free speech! See!? Then he proceeded to lament the excessive left-wing influence on college campuses. His proof? If John Kerry is yelled at by someone at a speech, then colleges must be sprinkling liberal dust onto the eggs at the dorm cafeteria. Otherwise, how could any semi-liberal or left winger be upset with John Kerry? Huh?! Way to stay on topic, buddy. 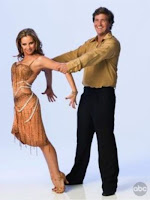 Aside from this concept being obviously ridiculous, it is a direct contradiction of his commentary from 24 hours earlier when Tucker and show contributor Willie Geist actually seemed impressed that Kerry was even giving the guy the time of day. Tucker acknowledged that it was more than he would do in a similar situation. Why the change? Well, since Tucker is practically the only conservative not on the Fox News payroll, he must have been prepping his new audition tape for his eventual job hunt. The guy has the worst ratings of anyone on MSNBC, so he won't last forever. Rupert Murdoch, here he comes!!

Tucker did not make any mention of the fact that for the last seven years, no one who is not a loyal Bushie has been able to attend a speech or appearance by the President of the Unites States!! The administration even created a manual to teach supporters how to weed out anyone who has not drank enough of the Kool-Aid. Wearing an anti-Bush t-shirt? Then you can't listen to the president, and you may not be able to fly on an airplane. Want to express your first amendment rights at a Republican Party Convention? You must stay inside the "free speech zone" (aka the cell miles away from the convention) or you will go to jail. This seems much more egregious than John Kerry standing by while law enforcement takes down a heckler (and one that Kerry was in the middle of speaking to when the guy was detained, by the way). Kerry was actually answering a question! That's much more than George W has done since 1999.

But that wouldn't fit into the right wing narrative. Blaming Bush for actively denying people their rights is "bashing," but attacking Kerry because he didn't pull a Jack Bauer and jump down from the stage, run top speed to the back of the auditorium, and singlehandedly fight off eight cops to save the heckler, is apparently legitimate criticism of Kerry and of liberals.

But that is where we are. Backwards = forwards. Clear skies = pollution. Peace = war. Straight = gay. Lying about a war is okay, while lying about a blowjob is a capital offense. We live in Bush country for, at least, another 400-some days. While that isn't much, I wonder how long it will take to weed out the right wing influence in the media. You can't deny it. Republican talking points are used -- almost verbatim -- as news. How many times did you hear the testimony of Gen. David Petreaus last week referred to as "The Petreaus Report"? He didn't write that! He's not the commander in chief -- Bush is. It is his policy and his report. But, Bush has no credibility, so the media willingly abets his deceit by referring to the policy as that of Petreaus. Another example is how the media continues to refer to ending the Iraq War as coming from the "far left." Far left?! Since when is 70% of the American population far left? And why are the only people considered "pro-troops" those who support the policies of George W. Bush? I am pro-troops, but I am against the commander-in-chief and his policies. He is a civilian, and the one who makes the policy. I see nothing contradictory about supporting the troops, but not supporting the current mission. Hate the sin, love the sinner, right? It's no more illogical than that.

Damn, I'm pissed. I need to end this post now before I give myself a heart attack. Wake me up in January 2009 (but only if a Democrat is president).
Posted by Dave Splash

Clearly it is the duty of every police officer to be a sparring partner.