The Wait Is Over - Silversun Pickups TONIGHT! 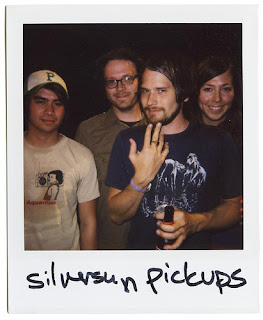 I have been talking about them and playing them on my show for over a year. I picked their album, Carnavas, as the best album of 2006. Now, I will finally be seeing Silversun Pickups in concert. I have pretty high expectations for tonight's show at Slowdown because I have personally been hyping them so much. The show is sold out, so if you don't have a ticket you are SOL. Oh well, you should have gotten on that much sooner anyway.

As previously mentioned, this will be my third night out in a row. Neil Hamburger was great last night, but not as good as the first time I saw him. I think his whole routine is funnier when you have no idea what to expect. This time, I knew what I was getting.

I am so freakin' tired that I'm basically running on fumes at this point. I am interviewing Matt Sharp from The Rentals in about an hour, and I have barely prepared. This has been one helluva week. I guess I'll just have to hook up an IV of Red Bull and just plough through it.
Posted by Dave Splash