Van Halen Reunion Is Back on! 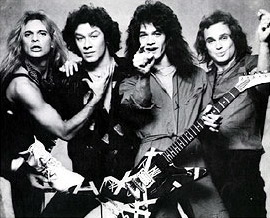 The arena trek will begin in early October.

Roth, who split from the rock group in the mid-1980s in hopes of solo stardom, will reunite with co-founders Eddie Van Halen on guitar and brother Alex Van Halen on drums. Eddie's teenage son Wolfgang will sub for Michael Anthony on bass.

A proposed summer amphitheater tour by the group never got off the ground, with Eddie Van Halen entering a rehabilitation facility for undisclosed reasons in March.

In the months since, the guitarist has been seen publicly looking healthy and fit.

I think they would be lots of fun to see. Diamond Dave is/was part of the best of Van Halen, IMO. Some of the Hagar stuff was good though, too. Maybe they could go on tour with both vocalists, and they could have a sort of Celebrity Death Match!