Uh Oh! Another Show To Obsess Over? 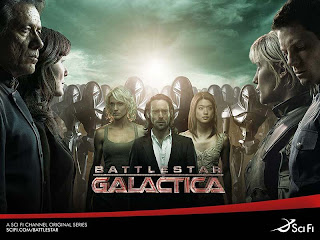 Over the course of the last couple of weeks, I have become obsessed with Battlestar Galactica. Not the old school show from the 1970s, but the new-ish, re-imagined version of the show that airs on the Sci Fi Channel. I had avoided watching the show when it first began airing because I assumed it was a cheap knockoff of the old show. It isn't. It is, literally, light years beyond the original.

In the 70s, Galactica was little more than an attempt to put something resembling Star Wars on TV. From what I remember of it, the show was not much intellectually, and the special effects were pretty lame. The technology was not there at that time to do anything digitally, and they did not have George Lucas type money. Maybe I am judging it harshly, but that's how I remember it. Science fiction is tough. It is supposed to be futuristic, but that future is often limited by the technological abilities of today. I have trouble watching the original Star Trek these days for just this reason. 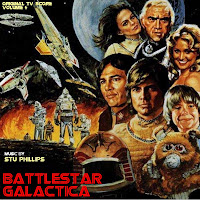 I caught the original pilot movie for the new version of BSG when it aired on the Universal hi-def channel a month or so ago. It looked spectacular, as it obviously had a superior budget to the original, and digital animation has come a long way in the last 25 years. But I found myself really captured by the storyline, and how relevant it was to the modern day.

Without revealing the entire thing, I will sum it up by saying humanity is reduced to a mere 50,000 people after all twelve planets that we live on (the 12 colonies) are simultaneously destroyed in a Cylon attack. The remaining humans escaped on a number of space ships of varying quality.

The Cylons were the silver robots that the Galactica fought in the previous show. This series takes place about 40 years after the previous series ended. The writers of the new BSG added a new wrinkle to the Cylons -- they can look and feel completely human. It takes a few episodes before anyone realizes this, of course. These human-looking machines are indistinguishable from the real thing in almost every way. There are only 12 models of this type of robot, and there are many copies of each. The main way they are exposed is when someone happens to see the same person twice. What makes it even more confusing is that many of the copies of these cylons are unaware they are not human until some type of chip is activated inside of them and they become aware of their true nature. So far, only half of the cyclon models have been revealed, so some are still hiding among the rest of the remaining humans. 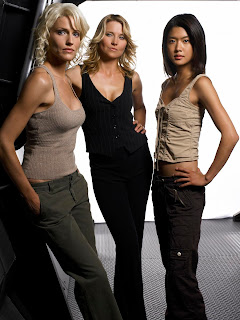 Having the Cylons look like these women is a whole lot more interesting than the metal storm trooper version. However, the metal versions have been remodeled and look much more menacing than they did in the old show. At some point, I see a conflict coming between the old and new models of cylon. That could be an interesting storyline.

I think the reason I like this show so much is that in addition to being a good sci-fi, action show, it also deals with many modern day social issues. What would happen if nearly all of humanity was wiped out in a matter of hours? How would you survive? Would civil law survive, or would military, martial law be necessary? Is it better to stay and fight or try to run and hide? If the "enemy" looks no different than I do, how do I know who is the enemy? Can I trust anyone at all? When humanity is reduced to a mere 50,000 people, should abortion be outlawed for the basic survival of the species? 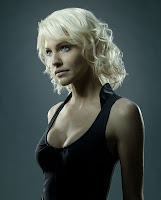 There are also a number of religious issues and conflicts that arise, and religion is a main component of the show. The humans of BSG are not monotheistic. They have many gods. They also have an ancient scripture that is designed to guide them throughout life. Like the Bible, it is taken as literal truth by some, and as mere superstition by others. This divides the population. The cylons are also religious, but they believe in only one god. They also believe that it was god's will for them to destroy humanity for their sins. As you can see, there are some parallels between the current clash of civilizations that we are currently experiencing (i.e. 9/11, Islam vs. the west, etc.).

There are a whole lot of other issues and topics that the show deals with, but understanding and accepting humanity's flaws is chief among them. I have just finished watching the entire 1st and 2nd seasons on DVD. Season 3 is not yet available, but the 4th one starts this Fall. I need to find a way to see 3 before 4 begins. Any ideas?
Posted by Dave Splash

Oh, come on, Howard. You just watch it because of that amazing blonde Cylon.

Knight of Nothing said...

I couldn't agree with you more, Howard! I was a relatively late convert to the series, but it is fucking great. The eye candy is just a bonus. The storyline of the first two seasons is awesome. The series lost its way a little bit in the third season, but I'm still looking forward to the final season. You've gotta catch up! Good luck.

J- That blonde cylon is pretty hot, but she's not the only reason I watch the show.

KON- I have been reading a lot online about Season 3, and your view seems to be the consensus. It wasn't as good as the first two. I read something that said Sci Fi Channel asked the writers to make "stand alone" episodes that didn't require a viewer to have seen all of the previous episodes. This was seen as a way to lure in new viewers. I guess it didn't work.

You can download season 3 episodes at the iTunes store.