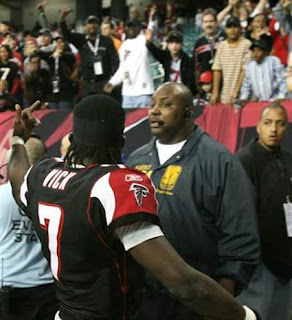 Human piece of shit, Atlanta Falcons quarterback Michael Vick will supposedly plead guilty to charges related to his dog fighting/killing operation. Though Vick publicly claimed his innocence, he is likely to serve up to a year in jail with this guilty plea. Good, but not good enough. Hopefully, no NFL team will give this loser a job when he gets out of jail.

Must be rough to go from being a $100 million man to a prison punk. Good riddance, loser.
Posted by Dave Splash

I'm just anxious for him to be out of the spotlight... and the longer he is out of it, the better.

He should be, but the issue of dog fighting and animal abuse still needs some more spotlight, though.