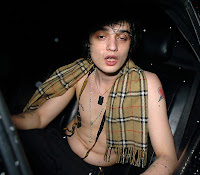 Full-time drug addict and part-time rocker Pete Doherty is venturing into Michael Vick territory as stories are circulating that he gave cocaine to his pet cat. The guy is already a no-talent hack who is known more for his public drug exploits with Kate Moss than anything artistic, but to stoop so low as to drug a kitten?!

The RSPCA (Royal Society for the Prevention of Cruelty to Animals) in England says it is a police matter, and won't confirm the identity of the owner of the coked-out feline.

What a scumbag.
Posted by Dave Splash