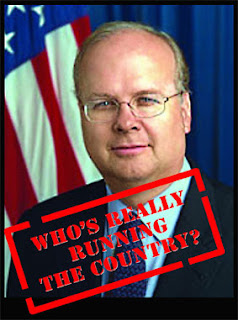 "Bush's brain," Karl Rove, announced today that he is resigning effective at the end of the month. Turd blossom is leaving the White House, oh what a wonderful day! The man who almost singlehandedly took a country united after a national tragedy and divided it up in the most negative and partisan fashion possible (turning national security into partisan wedge issue) is out. The man at the center of every single one of the numerous Bush scandals (yet remarkably remains outside of prison) is leaving his post. He's cutting and running while his guy, Bush, is facing the lowest approval ratings of any president in our history. The man simply cares more about George Bush and the Republican party than he does about the country and the constitution, and his legacy is a failed war, a failed presidency, and failing economy, a failing military, and confidence in the government at an all time low. Heckuva job, Rovey!

The man's legacy is a conservative movement largely discredited and disunited, a president with lower consistent approval ratings than any in modern history, a generational shift to the Democrats, a resurgent al Qaeda, an endless catastrophe in Iraq, a long hard struggle in Afghanistan, a fiscal legacy that means bankrupting America within a decade, and the poisoning of American religion with politics and vice-versa. For this, he got two terms of power - which the GOP used mainly to enrich themselves, their clients and to expand government's reach and and drain on the productive sector. In the re-election, the president with a relatively strong economy, and a war in progress, managed to eke out 51 percent. Why? Because Rove preferred to divide the country and get his 51 percent, than unite it and get America's 60. In a time of grave danger and war, Rove picked party over country. Such a choice was and remains despicable.

Rove is one of the worst political strategists in recent times. He took a chance to realign the country and to unite it in a war - and threw it away in a binge of hate-filled niche campaigning, polarization and short-term expediency. His divisive politics and elevation of corrupt mediocrities to every branch of government has turned an entire generation off the conservative label. And rightly so.
Posted by Dave Splash

Wow, great post, and those are great comments by Sullivan. He sums it up nicely indeed! Rove is a shithead of the highest order. Why does he hate America?

What a great day that was!!!