Checking In For a Minute 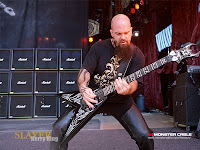 Sorry I have been so flaky with posts this week. It's just been one of those weeks, if you know what I mean. Still, it wasn't all bad. I did see SLAYER last night!! It was incredible, thanks for asking. Since the band is doing a co-headlining tour with Marilyn Manson, each act did only a 70-75 minute set. While that is more than enough for Manson to play all of his good songs, it is definitely not enough for Slayer.

What was weird is that I like Marilyn Manson, and have seen him in concert a couple of times before. But there was no way Manson could follow 70 minutes of Slayer. Manson seemed tame, safe, and cartoonish last night, while in the past, he came across as somewhat menacing and exciting. The crowd seemed to like both bands about the same, so I may have a minority view on the show. Either way, my friend and I left half way through Manson's set.

My plan for this weekend is to take it easy, work on the next podcast, and try to decide what to do with the rest of my life. I informed my boss that I intend to leave my job within the next few months. That went over better than expected, but we still have to have a "talk" about it next week. Not sure what I want to do next (or where I want to do it), but I do know that I don't want to keep doing what I'm doing. I am taking a week-long vacation after Labor Day to clear my head. Hopefully, I'll have more of an idea after that.

Since I haven't posted about it in a while, did anyone catch the season finale of John From Cincinnati last Sunday? Not exactly the resolution I was hoping for, and unfortunately, there won't be a second season. Fuck. I thought HBO gave shows a little more time to catch an audience. Granted, the show was weird, but it had some decent stars and was very well-written. So who was John? What are the ones and zeros? Who is John's father and his father's father? Why did the show end with John saying "Mother of god Cass-Kai" while showing Kai on the screen? My theory? I don't really have one. I was hoping someone else would have one. I hope they at least make DVDs of the show so the show's creators can explain the freakin' thing in the commentary or something.

So, no second season for JFC, but another weird, new show I like is coming back for a second, and I have already seen one of the episodes. The show is Dexter (airs Sundays on Showtime), and a friend turned me on to the fact that the first two episodes of season two are available as a torrent online. I have real mixed feelings about the whole torrent thing and file sharing in general, so I decided not to download the show and to just wait until September 30 when the season officially begins. But, as I often do, I changed my mind and downloaded the first two episodes. Since they are still available and have not been pulled for legal reasons, I have to assume that the folks at Showtime don't much care about these two downloads. It is probably some marketing strategy to build buzz for the show. Works for me.

Like I said, I only watched the first one, but it was great. In it, it looks like Dexter might be losing his nerve as a serial killer. I'll get to the second one this weekend. That's enough for me. Talk soon.
Posted by Dave Splash