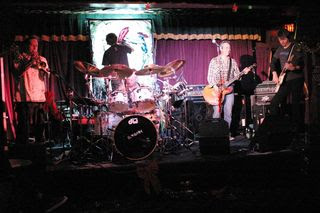 We've been in a bit of a dry spell for concerts in Omaha over the last couple of weeks. It won't last, obviously, as there are plenty of cool things coming up. Tonight, there is a possibility of a great show in the form of Banyan.

Banyan is an improvisational, jazz/rock band founded by former Jane's Addiction drummer Stephen Perkins. The rest of the players are different depending on where they are performing. I saw them about 10 years ago in Los Angeles, and the band included Sonic Youth's Thurston Moore, Mike Watt (Minutemen/fIREHOSE/Stooges), Money Mark (Beastie Boys), and Nels Cline (Wilco/Mike Watt band). Pretty impressive, right? Well, yes and no.

I just don't care much for "free jazz" or improv music. I can appreciate the talent involved in making it, but I just don't really enjoy listening to it. Tonight's line-up will not feature any of the above rockers (except for Perkins), but it will feature the bassist from the jam band, The Big Wu, and some guys I do not know.

I think I am going to go if for no other reason than to see Stephen Perkins in a small club. The guy is an amazing drummer, and Jane's Addiction was one of the best. Opening the show is local jam band, The Balance. The show is at The Waiting Room, 62nd & Maple.
Posted by Dave Splash