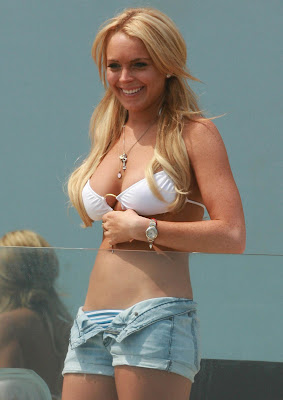 I have pretty much avoided posting anything about Lindsay Lohan on this site for a number of reasons. First and foremost, I don't really care about her. But last night I watched the Prairie Home Companion movie (which bored the shit out of me, by the way), and I realized that Lohan is becoming more of a serious actress. She's not just some mindless party girl like Paris Hilton. Mean Girls was a great movie, but I chalked that up to the writing of Tina Fey, and not to Lohan's acting ability.

Regardless of what you may think about Lindsay as an actress, it is impossible not to think highly of her as a sex object. She is able to play that part to a T. Nowadays, you don't even have to feel guilty for lusting after her -- she's 21.

Hollywoodtuna has posted some great shots of Lindsay Lohan from yesterday wearing a bikini and some Daisy Dukes. The shots are quite nice.