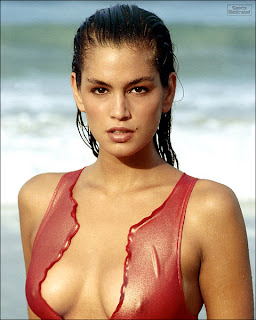 In the late 80s and early 90s, there was no hotter supermodel than Cindy Crawford. She set the modern standard as far as I'm concerned. As with any model, her time in the spotlight ended when she started getting a little older. Unfortunately, after the Cindy Crawford era came the "models that have the body of a 12-year-old boy" era, which I did not appreciate. In the past, I have pontificated on what I think was the reason for the negative trend (most fashion-types like 12-year-old boys as opposed to sexy women with a figure), so I won't go down that road here. 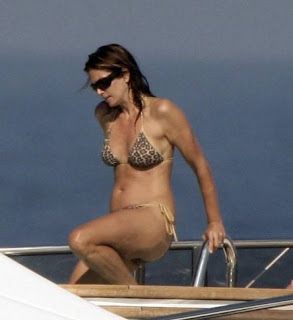 Some member of the stalker-azzi has managed to capture some very recent topless pictures of Cindy Crawford. She was shot while on board someone's boat while she was tanning. For age 41, I think she looks exceptional. Check out her pics here. (NSFW)

She's certainly holding up better than former Playboy Playmate Jennifer Lyn Jackson (Miss April 1989) who just got herself arrested for drunk and disorderly conduct in her trailer park.
Posted by Dave Splash