Two Paragraphs on Built To Spill in Omaha 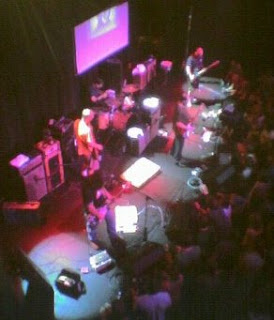 Brief comment on the Built To Spill show from last Wednesday night. It was amazing - best I've ever seen them. The knock on their last show was that the band jammed too long and played a bunch of tunes that no one had heard yet (this was a month or so before the last album, You In Reverse, had been released). This was definitely NOT the case this time. They ran through most of their best songs from the albums since 94's There's Nothing Wrong With Love.

I was in the primo spot at Slowdown -- on the far left of the balcony. I had a totally unobstructed view and it sounded great up there. The show was sold out, but it was not oversold. I liked that. Omaha now seems to be on the shortlist of cities that Built To Spill hits on every tour. I am assuming they'll be back next year when the new album is released.
Posted by Dave Splash

That's awfully nice when bands you like decide they like playing in your town and come there often. A couple of artists I like, Neil Finn and Porcupine Tree, seem to come to Portland and Seattle a lot. Not that I can go see them every time they show up, because of work and family obligations and because it's always a 5-6 hour drive, but I still think it's cool.

I AM going to see Wilco at a great outdoor venue on Aug. 22, anyway. Can't wait for that one!