So What Exactly Is a Dick Cheney? 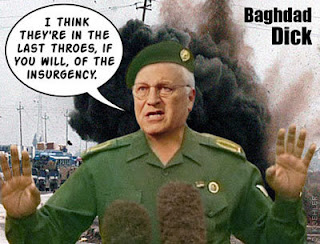 Last week Vice President Dick "Go Fuck Yourself" Cheney declared that he is not a member of the executive branch of government when it comes to turning over subpoenaed documents or following national security protocols; but he is a member when it comes to claiming "executive" privilege for not following those rules. This Modern World has come up with a few other examples of what Cheney both is and is not:

• A half-human gill-breather, allergic to sunlight, hellbent on global domination

• Able to dematerialize at will, reassembling his atoms at an undisclosed location

• Bionic, with a cesium-encased heart able to withstand the guilt of 1000 normal hearts

• Able to connect to the Internet simply by raising his hand and barking, “Cheney online!”

• Staring right this second at a wall map of Iran, holding a giant red crayon
Posted by Dave Splash