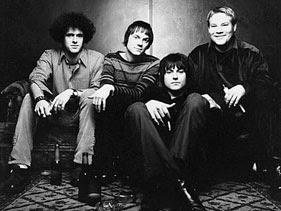 Easily one of the best band of the 1990s, Tennessee's Superdrag are reuniting for a small series of shows. The band had one mainstream hit, "Sucked Out," but all five of their releases (plus a brand new compilation called Changing Tires On the Road To Ruin) are excellent and worth owning. They took the best elements of 80s Midwest indie music (i.e. Replacements, Husker Du) and mixed it with a 60s-style power-pop sensibility. The band's high-water mark for me is the 1998 album, Head Trip In Every Key.

Superdrag's original line-up ended in '99 when the bassist and lead guitarist both quit. The band soldiered on for two more albums and tours before breaking up in 2003. This reunion will feature all of the original members. As of right now, there are only six dates: