Today on The Factor I bring you a real life celebrity takin' it all off. The celebrity in question is Garcelle Beauvais, who has starred in numerous movies and television shows. In the late 90s, she starred as "Fancy" on the Jamie Foxx Show, then she played a D.A. on the last couple of seasons of NYPD Blue. 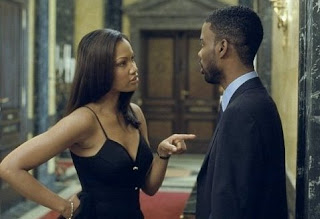 I probably would have appreciated seeing Garcelle Beauvais nude about a decade ago. She still looks quite good at 41. However, her appearance in Playboy seems more about career revival than anything else. Oh well. See more of Garcelle here. (NSFW)
Posted by Dave Splash