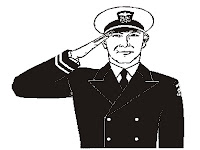 From the office of Senator Jim Webb (D-VA): Washington, DC—Senator Jim Webb (D-VA) announced today that the Military Officers Association of America (MOAA) and Major General Robert B. Newman Jr., the Adjutant General of Virginia, have expressed support for his amendment to the National Defense Authorization Act requiring that active-duty units and troops have at least equal time at home as the length of their previous deployments for Operation Iraqi Freedom and Operation Enduring Freedom. The amendment also sets a minimum 1-to-3 year ratio for National Guard and Reserve units and members.

In a letter endorsing Senator Webb’s amendment, Vice Admiral Norbert Ryan, Jr., USN (Ret.), President of MOAA, wrote: “On behalf of the 368,000 members of MOAA, I am writing to express MOAA’s support for your amendment that would support our military men and women by establishing standards for dwell time between consecutive operational deployments. (read the entire letter here)

UPDATE 7/11/07: The Republicans have successfully filibustered this amendment, showing that they do not care about the troops at all.
Posted by Dave Splash