Keepin' It Real At the Omaha Rap Show 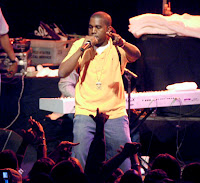 Had a rather eventful evening last night. I worked the door at a rap show down at Sokol Underground. It was some type of showcase with 12 or 13 artists scheduled to appear -- all of them local. I've worked the door enough times to know to expect the unexpected. And though I may be accused of some type of racism, I have to say that rap shows are always the most...volatile, let's say. Last night was no exception.

The show's organizers were nice enough guys, and they handled themselves well considering the circumstances. Apparently, there was a great deal of miscommunication regarding exactly who would be performing, and at what time. Everyone in attendance seemed to be there just to see one act; and nearly everyone tried to claim some association to an artist so they could get in for free. Because there were so many freakin' artists, it became a constant struggle keeping track of who was who. I finally had to lay down the law and say that any artist was two people, and everyone else had to pay. This did not go over well.

Once the show got going, the line-up was constantly changing, as was the order. Things were going okay until one of the acts was told that her set would be shorter than she had expected because she showed up late. She threw a tantrum, as did the 15 or so people she brought with her -- most of whom had paid the $7 cover. They started rushing up to me demanding their money back. I refused. Fuck them. 1) It was only $7 and 2) they had been there for a while AND their artist was going to perform. Tempers started to flare and all of a sudden one of the angry "friends" jumped on stage and started trashing stuff. I told him he had to leave and he threatened to kill me. It was about this time that I decided we might have a problem.

I ran to the back of the club, grabbed my laptop and the cash drawer and locked them in the back room. The sound guy cut the music and turned on the lights, but no one was leaving. The 15 angry people became a much larger number by this point. I came back out to see what was happening when my co-worker told me to stay in the back because the crowd associated me with the money, and they wouldn't leave as long as they could still see me. After a minute or so in the back room not knowing what was happening, I peeked outside and saw what looked like a potential riot. The sound guy told me to call the cops, so I did. Four patrol cars full of Omaha's finest showed up and dispersed the crowd. Whew.

Maybe we didn't need the cops, but it was hard to tell for sure. I'd rather be safe than sorry, I guess. All that hassle over seven measly dollars. Suffice to say, I am not doing another rap show without a security guard. That is just a burden that has to accompany rap shows.

Tonight I am working a metal show at the same venue. Let's hope there are no near riots tonight.
Posted by Dave Splash

Howard, I hope the metal show went better... I would imagine it probably did. That's quite a story about the rap show... whoa. You are a brave guy. I would have been pissing and shitting my pants out of sheer fright.

The metal show was a thoroughly pleasant experience next to that rap gig.

By saying this you will not be considered a racist unless you are a republican. If you are a democrat you can get away with it.

Only a right wing asshole would make such a stupid comment, Mr. Anonymous. Thanks for presenting that view.