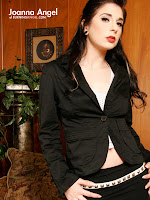 Each Time It's More Fun
by Shahar Smoohah (Haaretz)

NEW YORK - At about 5 in the afternoon, the living room of the modest loft in Williamsburg, Brooklyn, starts to fill up. Joanna Angel, the queen of the alternative porno scene of New York and a director herself, is summoned by the videographer to stand in for the female star of the film, a voluptuous blonde who calls herself "January," in order to check the lighting and the camera angles. Dressed in light blue sweatpants and a pink tank top, Angel sits atop the male star, a skinny, bespectacled fellow called John, and starts bouncing up and down while she yelps and lets out a rolling laugh. Mitch Fontaine, the videographer and the co-owner of burningangels.com, nods in satisfaction. A surprised stills photographer, who has been shooting January in the adjoining room, peeks in. "I thought that you'd started without me," he says. "Cool it, I'm trying to work here."

The guideline of the site, which has turned into a flourishing business, was pretty clear right from the start. "We knew we wanted people on it who look like our friends and not like posters. We wanted girls with tattoos and piercings and funky-looking hair. We wanted something that would be part of the punk sub-culture that we are a part of. Sex and rock'n'roll - that was the concept," she says.

The first day of shooting, which Angel and Fontaine describe as "a weird scientific experiment that we didn't know how to do," took place in the basement of the house they shared. At the end of the day, they had footage of Angel and four girlfriends from college that they could upload onto the site. Accompanying the pictures was a blog written by Angel and reviews of records and performances by punk bands. To have access to the site's explicitly pornographic contents, viewers had to subscribe, at a fee of $10 a month (today, approximately 5,000 subscribers to the site pay $12 monthly. Subscribers to a second site pay $24.)

"I used my real first name, Joanna, because I didn't think that anyone would make a big deal out of it," she says. She was wrong. "In New Brunswick, New Jersey, where Rutgers is located, this was the biggest thing that ever happened to them. I would go to classes and I would see people whispering, 'There's that girl who set up a porn site,'" she recalls. That wasn't how she had planned her career, she says, "But when I saw how many people were talking about it, I said to myself that I can't pull out now because I would look stupid."

At the end of that tempestuous year she finished her degree, moved to New York and started working as a stripper, figuring, "once I'd already taken off my clothes, why not?" Days, she worked on the site, and in the evenings, she danced at a club. "The business was my baby, but there were times when we didn't make money. Then I'd leave it for a few days and just go to dance. But then I would say to myself that I wasn't going to throw out everything I'd built. Even the girls at the club would tell me that I couldn't stop with the site," says Angel.

The lively, giggling Angel says of herself that she began rebelling against convention at an early age. She grew up in New Jersey, the daughter of an Orthodox Israeli mother who had immigrated to the United States together with her husband, an American Jewish student she had met in Jerusalem. "My home was very religious." Angel says. "I went to a day school, and of course we kept Sabbath and were kosher at home. I never ate hametz on Passover and I always fasted on Yom Kippur. I still do that. I don't do all the rest, but I can't give those two things up."

At the age of 13, Joanne started to move away from religion, and found herself drawn to the punk scene at her junior high school. She pierced her navel in ninth grade, something she managed to conceal from her mother for two years, with the secret being revealed at a highly inopportune moment. "It was Yom Kippur and we went to do tashlikh [ritual discarding of sins, in the form of crumbs, into a body of water] at some lake in New Jersey near the temple. When I raised my arm to throw the bread into the water, my shirt came up and my mother saw the piercing. She got really angry and she cried," she recalls.

Angel speaks Hebrew reasonably well, and says that Israel always constituted a big part of her identity. Her sister has been living in Israel for the past year, where she has been teaching English, but will soon return to the United States. "When I was younger, I'd go to Israel every year. I was also in that thing, Hetz Vakeshet [Bow and Arrow], where you pretend that you're in the army for six weeks. I liked that a lot. That was the best summer I ever had. I was 15, and I learned to shoot an M16. We slept in tents, and they'd take us on long hikes and gave us maps so we'd learn the topography or something like that. I don't remember very much, but I do remember getting drunk a lot with the soldiers," she says.

Angel got her first tattoo when she was 18, and she says that with each new one she still feels bad, because "I know how sad it makes my mother."

'You're doing this for everyone'

The sound of church bells penetrates the loft and causes Angel to look around anxiously. "This isn't good for us. We want to start filming in a little while," she says, and then starts briefing January and John. The basic story of the film is about a sensitive, bespectacled guy who is humiliated by January, the tattooed Lilith. Angel gives staging directions: "I'd be glad if we could do it all in one shot, and I don't want you to look at me or at the camera, so that we won't have a hard time editing this. I want our fans to see that you are enjoying yourselves, and from what I can see, I am sure that you will have a good time. And one more thing, John - I want you to keep everything open, so the camera can get all the action. You're not doing this for yourself. You're doing it for everyone. Remember that."

Angel's first appearance before a video camera took place in the summer of 2004, when she decided to produce a DVD that would transmit the spirit of the site. It was called simply "BurningAngel.com: The Movie." Though she had already directed a few short films, she discovered that the task was not so simple. "First of all, I had to find a guy who would have sex with me, and I discovered that while a lot of guys wanted to have sex with me, not a lot of them were willing to do it on camera. For me it's a business and I wanted a guy who would see it as work and would be serious. That's the reason you see the same five guys in all the porn films. There aren't a lot of guys who can do this," she says.

But the day her scene was supposed to be shot turned into a logistical nightmare. The hotel room where they had intended to film turned out not to be suitable, as was the case with another hotel room they checked out. Angel almost gave it all up, and then her co-actor, Tommy Pistol, suggested checking a loft where some friends lived in Brooklyn.

That sounded good, but when they arrived, there was a big party under way on the roof of the loft, and the partygoers weren't interested in leaving for the sake of art. After considering the situation briefly, the filmmakers decided to go ahead with their work in any case, and the couple did their thing on the roof, in front of an audience of about 50 people. The experience, which Angel describes as "great," was documented on the DVD and the result looks very different from mainstream porn: It's cut like a music video, the soundtrack is punk music and between the sex scenes there are interviews with young bands. Most important: Angel and Pistol as well as the other performer in the film look like they are really enjoying what they are doing. Since then she has participated in about a hundred scenes and she says, "It's already second nature to me. It's more and more fun each time."

'I can no longer go to temple'

Her parents have also paid a price but, according to her, the decision to stand with her has served to make the family stronger. "My parents refused to disown me, and now some of the relatives who told them to do that are not longer speaking to them. When I saw the way my parents defended me, it brought me much closer to them. They say: 'We didn't tell her to do this, but she's our daughter, and we love her,'" Angel says.

Nonetheless, Angel says that her mother - with whom she remains close - does not approve of her occupation. "My mother worries about me a lot. You know, she's a Jewish mother and if she doesn't hear from me, she gets very worried," she says. According to her, her father admires her entrepreneurship, whereas her mother is trying to persuade her at least to stop appearing in the films. "I tell her 'No,' because that's the most fun part of my work. Running a business and dealing with checks and numbers, hiring people and firing people - that's really boring stuff. When I can simply have sex in front of a camera, that's great. It's great being the center of attention," she says.

Angel does give her parents a certain amount of pleasure in that her boyfriend, who also earns his living performing in porn films, is Jewish. "I think that I've disappointed my mother in so many ways that I would like to make her happy by marrying a Jew. I think she will forgive me for all the things I have done if I marry a Jew," she says. "Eventually, I want to have a family, and Judaism was a huge part of my life when I was growing up. I don't know if I believe in God, but I can't imagine myself with a family without celebrating Hanukkah and without my children having a bar mitzvah or a bat mitzvah."

Angel says that she enjoys directing because then she can go to work in pajamas, as she takes a big bite out of her sandwich. I ask her what she is eating, and she quickly responds, "turkey," and lowers her gaze.

John, the bespectacled performer, takes the sandwich from her hand and bites into it.

"Okay, okay, it's ham," says Angel and bursts into wild laughter again. "My mother is going to kill me. That's all she needs, for me not to eat kosher."
Posted by Dave Splash