The Good News From Iraq: We're Killing Them So Well, They Die Twice! 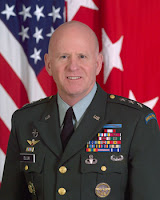 I bet this happens more often than we are aware of. The emphasis is mine.

(The Examiner) The U.S. command in Baghdad this week ballyhooed the killing of a key al Qaeda leader but later admitted that the military had declared him dead a year ago.

A military spokesman acknowledged the mistake after it was called to his attention by The Examiner. He said public affairs officers will be more careful in announcing significant kills.

The incident shows the eagerness of the command to show progress in dismantling al Qaeda at a time when Democrats and some Republicans are pressing President Bush to withdraw troops from Iraq. Army Gen. David Petraeus, the top U.S. commander, has declared al Qaeda enemy No. 1 in Iraq.

Brig. Gen. Kevin Bergner began his Monday news conference with a list of top insurgents either killed or captured in recent operations. He said they had been eliminated "in the past few weeks" and were "recent results."

"In the north, Iraqi army and coalition forces continue successful operations in Mosul," he told reporters. "Kamal Jalil Uthman, also known as Said Hamza, was the al Qaeda in Iraq military emir of Mosul. He planned, coordinated and facilitated suicide bombings, and he facilitated the movement of more than a hundred foreign fighters through safe houses in the area." All told, Bergner devoted 68 words to Uthman's demise.

Uthman was indeed a big kill, and the military featured his death last year in a report titled "Tearing Down al Qaeda."

"The more we can bring down al Qaeda and other terrorist organizations, the greater probability of reducing violence," Army Maj. Gen. William Caldwell, the command's chief spokesman said, in 2006.

Uthman was listed in the 2006 news release as "the chief of military operations [in] Mosul."

When The Examiner pointed out that Uthman's death had been announced twice, a command spokesman said in an e-mail, "You are correct that we did previously announce that we killed him. This was a roll up to show an overall effort against [al Qaeda in Iraq]. We can probably do a better job on saying 'previously announced' when we do long-term roll ups to show an overall effort."
Posted by Dave Splash