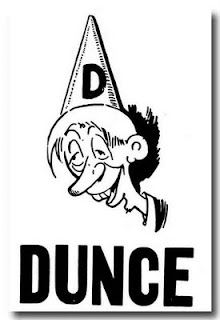 President Bush has convened a gathering of top scholars, historians, authors, and philosophers to discuss why the US is so hated throughout the world. He is apparently asking some of the stupidest of stupid questions like, "Why does the rest of the world seem to hate America? Or is it just me they hate?" It's you, man. It's you.

Almost as idiotic as those questions, are the statements coming from the mouth of Homeland Security Secretary Michael Chertoff. This Bush crony has been making the rounds of the various news programs to discuss the recently foiled terrorist bombing plots in the UK. In typical Bush Administration fashion, Chertoff is using the foiled attacks to promote itself and and its agenda. Chertoff and his ally, Republican Senator Joe Lieberman, have been claiming that these attacks "prove" that we need to keep going with the illegal, warrantless, wiretapping program. He says, "I’m concerned about losing the tools that I can tell you we use every single day to catch the kind of plotting which we’ve just seen, obviously, give rise to the attempted bombings in London. I think Joe Lieberman is dead right." Joe Lieberman, right? Not bloody likely. The reason is that this plot was not foiled through wiretapping, torture, or any other violation of law. The plot was foiled because of an alert citizen that saw a smoking car and alerted the authorities. These "terrorist masterminds" used their own, personal cell phones as a detonation device. Since it didn't explode, the phone was used to track down the owners. Good, old fashioned dumb luck plus solid investigative work foiled this attempt, not illegal wiretaps.

No disrespect to the British authorities who have done a great job apprehending these guys, but we all lucked out. These terrorists screwed up and got caught rather quickly. For Chertoff and Lieberman to justify their disgraced and illegal program by citing the events in London is just...dumb.

In my last example of stupidity, I give you a Nebraska microbrewery that has created a new concoction called Git-R-Done Beer in honor of redneck comedian Larry the Cable Guy. The beer's creator said, "Rednecks love quality, too." Yes they do, and you can tell by who they vote for.
Posted by Dave Splash