Your New(ish) Supreme Court - At Your Service

Ok, I'm a realist when it comes to free speech in school. When kids are on school grounds, they inherently give up some of their rights. Just like us working folk give up some of our rights to say what we want to say and wear what we want to wear at most of our jobs. But it's a fairly telling sign of things to come from yesterday's dual supreme court rulings: student free speech got dinged - corporate free speech (e.g. the majority of the financial contributors to political ads before elections are held) get protected (sorry, McCain, Feingold).

It was a given that John Roberts was going to get in, but as a sign of rulings to come for a looooong time (Roberts and Alito aren't exactly Stephen Breyer age), I'm curious if some of the dems who rolled over when Alito's nomination was going on aren't secretly kicking themselves in the ass for not putting up more of a fight.

It's going to be very curious the next time an obscenity-related case comes down the pike. For Roberts, Alito and the GOP parrots on talk radio - it's amusing they feverishly protect the First Amendment when it comes to political ads, but obviously not when ordinary citizens opt to try to use their free speech rights if what that person says so much as strays from the party lines. 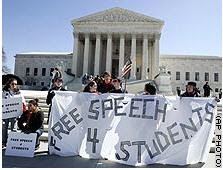