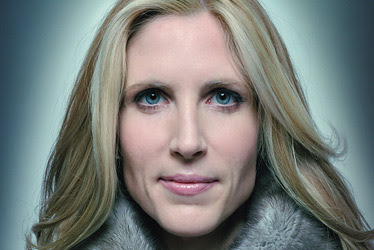 I was watching Joe Scarborough on MSNBC this morning. He had Ann
Coulter on the phone, talking about her recent dustup with Elizabeth
Edwards. AC actually seemed to be losing her cool...Joe wasn't
picking on her but she kind of went off on a rant about how
everybody in the world was attacking her unfairly, etc. etc.

Probably just an act. But it's fun to think about her actually
having real human emotions and vulnerabilities.

I'm actually kind of puzzled why she's singled out John Edwards.
He's not running well, in fact if he doesn't win Iowa he'll probably
have to drop out of the race. Seems like she'd be more interested
in lobbing her acid spitballs at Obama and Hillary...

She's not just nasty. She's also a planner. When she makes a remark,
she nearly always does it in a slightly confusing manner so she
can claim later that she was taken out of context.

For example, she didn't come right out in March and call John
Edwards a faggot. Instead, she used this roundabout routine that
touched on a Gray's Anatomy actor having to go through rehab and
implied the same thing would happen to her if she tried to discuss Edwards.

Then a couple days ago, Coulter said "If I'm gonna say anything about John Edwards in the future, I'll just wish he had been killed in a terrorist assassination plot." Once again, a nasty
and confusing remark which was actually a response to something
Coulter's pal Bill Maher said recently about Dick Cheney.

She is one cold-blooded conservative. I just really, really hope
she gets a wake-up call someday and decides to resume human form.
Posted by Dave Splash

Check her DNA. I'm not sure she is actually human.

You know, what I am tried of when discussing Coultergeist is when pundits (especially Scarborough) claim "both sides do it." Oh really? Name a liberal that attacked victims of a crime by saying they enjoyed it (Coulter said the 9/11 widows enjoyed their husbands deaths). Name a liberal that goes around calling prominent conservatives "faggots." Name a liberal who makes up virtually every "fact" in every argument they make (Coulter claimed just 2 days ago that WMD was found in Iraq, Saddam and Osama did work together on 9/11, and the reason for the invasion was not WMD related).

My last comment on this she-devil is that don't you find it ironic that she is whining about her "Edwards being killed by terrorists" being taken out of context, then she went and took Bill Maher's Cheney comment out of context to make her point. So, she's a hypocrite as well.

Now wait a minute, Howard! I go around calling conservatives those names, and I make up all my own facts!

Coulter may put on a very good schtick, but she must be very convincing because there are so many Coulterbots out there.

She will say something nasty and then refer to something similar she claims was said by Democrats or "liberals", thus making it "o.k." for her to have said things as nasty as she did. It seems to almost amount to a kind of false projection. It's pathetic.

I don't know what can wake her up when she is so far out of touch with the realities of being human, and so remote from empathy. If she wasn't such a high-profile public figure, I could almost feel sorry for her. If she was an average person who didn't have a microphone or podium in front of her and if she was seeking some kind of treatment for her disorder, then yes, I could feel sorry for her... but because she influences so many people in such a negative way and helps the public debate drop to new lows, I don't feel very sorry about her. I mostly just feel sad that she has as much influence as she does because people have dumbed themselves down enough to buy into her crap.