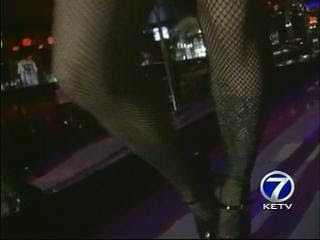 I'm posting this story mostly because it happened in Omaha. I thought this story was funny because if you are ever in a strip club and talk to one of the girls, invariably the girl will claim she is "working her way through college" by stripping. In 99% of the cases, the girl is lying. In this case, the girl in the story started stripping as part of her sociology thesis. I never took any classes like that when I was in college!

OMAHA, Neb. - A University of Nebraska-Omaha student took a job recently as a stripper for class credit. Jenny Heineman, a sociology student, said she wanted to bring sex workers out of the dark, so she felt she had to enter their world. Her thesis, "Gender and Work: An Ethnography of a Midwest Strip Club," got her a B and she graduated this spring with high honors.

By day, she works at Blue Line Coffee Shop, selling cappuccino and scones.

As a sociology student studying in Europe, the 22-year-old said she became interested in another line of work.

"I was taking a course in sexuality and culture, and I got introduced to the underground culture of sex work and became very interested in the rights of sex workers," Heineman said.

"Upon returning to the states, my curiosity and my desire to work with these women led me to get a job," she said.

By night, Heineman danced at The 20s Club.

"I probably go up on stage four times in an five-hour shift, and I'm constantly thinking, 'Please don't fall,'" Heineman said. "The rest of the time is spent mingling with customers and doing dances for customers at tables," she said.

She said she has learned to strut her stuff in 5-inch heels.

Her experience with customers and her fellow workers was guided and graded by professor Shireen Rajaram.

"I think it's a very worthwhile topic for us to look at," Rajaram said.

Rajaram applauded her student's courage. She said only through this kind of first-hand account can sociologists identify real issues and dispel stereotypes.

"I mean, it's a huge industry and so it's important for us as socio-anthropologists to shed light on the issues, especially the social injustices," Rajaram said.

Heineman said the biggest injustice is the stigma placed on her fellow dancers.

"A lot of these women are doing this to support their families. Several of them are single mothers. They work very hard at a job that can be quite tiresome," Heineman said. If nothing more, she said she hopes to raise awareness of inequities and earn them the respect she thinks they deserve.

"Get to know your local stripper -- that's the message we should end on, yeah," Heineman said.
Posted by Dave Splash

Cool blog, i just randomly surfed in, but it sure was worth my time, will be back

Deep Regards from the other side of the Moon

Thanks for stopping by!