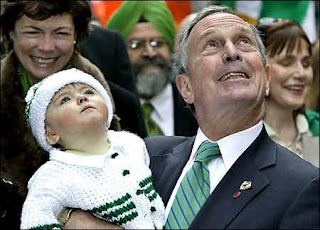 NEW YORK — New York Mayor Michael Bloomberg on Tuesday switched his party status from Republican to unaffiliated, a stunning move certain to be seen as a prelude to an independent presidential bid that would upend the 2008 race.

The billionaire former CEO, who was a lifelong Democrat before he switched to the GOP for his first mayoral run, said the change in voter registration does not mean he is running for president.
---------------------------------------
This is a very interesting turn of events. Will Bloomberg run as an independent? At this point, I'm not sure who this helps or hurts among the current crop of candidates. It certainly can't help Rudy Giuliani. If you compare the two NYC Mayors, it is doubtful that anyone would prefer Rudy (especially anyone who actually works in the city). His 9/11 sheen is wearing off as the truth about his administration's actions pre-9/11 are coming to light.

Still, Bloomberg is left of center politically so his candidacy could hurt the Dems. This event is just too new to figure out all of the angles.
Posted by Dave Splash