HBO Continues Its Streak with 'John From Cincinnati' 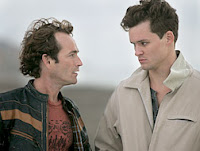 I have just started watching the very bizarre new series on HBO called John From Cincinnati. Apparently, it premiered right after the final Sopranos, but due to the way that show ended, a lot of people did not continue watching HBO afterward. Too bad, because it is actually an interesting show.

John From Cincinnati takes place in southern California, in an area where surfing is the main past time. The Yost family are a somewhat legendary surfing clan with fans around the world. Mitch is a legend from back-in-the-day, and he still surfs despite being a grandfather. His son, Butchie, is also considered a surfing legend. However, his career was ended due to his drug addiction. He is currently a heroin addict living in a transient motel. Butchie's son, Shaun, is an aspiring surfer who lives with his grandparents because his father is too much of a screw up to take care of him. 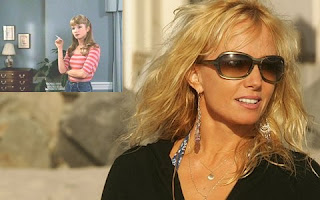 Shaun's grandparents -- Mitch and Cissy (played by the still hot Rebecca DeMornay) -- are leery of allowing Shaun to compete in professional surfing because of the negative effects it had on their son, Butchie. One of the contributors to Butchie's demise was a sports agent named Linc (played by Luke Perry, yes he's back). Linc is now interested in working with Shaun, but he needs to convince the grandparents that he is not the same guy who mishandled Butchie all those years ago.

That alone seems like an interesting enough show for me. However, John From Cincinnati is not merely a family drama or a show about surfing. There is a bizarre, almost otherworldly element to it as well. That is where the "John" from the show's title comes in. John appeared out of nowhere, approached Mitch as he was getting out of the water, and told him to "Get back in the game." He repeated the phrase a number of times. He then quietly left and sought out Butchie. When he arrives at Butchie's place, he is refused entry unless he has $2300 on him (the amount Butchie lost in a drug deal). Miraculously, that exact amount appears in his pocket, and he and Butchie become fast friends. He assumes this new "friend" is a surfing fan with deep pockets and the two become inseparable.

At first, John seems like he is foreign because of his limited knowledge of American customs and his minimal grasp of English. He repeats things back to the people who speak to him, and clearly has no idea what the words mean. This is either endearing or infuriating to the people he encounters. But the show is starting to hint that the place he comes from is not a foreign country, and it is not Cincinnati. He seems to have been sent to this place to bring the Yosts back together as a family. But there has to be more to it than that. There have only been three episodes, so I cannot tell you more than that yet.

There are a few other characters in the mix, but the only one I'll mention is the character of Bill Jacks (played by Ed O'Neill, formerly known as Al Bundy). Bill is a retired cop who lives alone and is something of a recluse. His connection to the Yosts is not explained, but he is very close to Cissy and Shaun. Bill spends all of his time with his many birds, and the town seems to think he is crazy. There is something significant about Bill, his birds, Shaun, and John, and I can't quite tell what it is. If I explained any further, it might serve as a spoiler for some of the first episodes, so I won't say any more.

Suffice it to say that I think this is yet another winner from HBO. New episodes air Sunday nights at 9PM Eastern. This Thursday, HBO will play the first three episodes back-to-back so new viewers can get caught up. Give this show a little time if you don't like it at first. It may take a while to fully appreciate. I'm still just getting into it myself.
Posted by Dave Splash

Email ThisBlogThis!Share to TwitterShare to FacebookShare to Pinterest
Labels: John From Cincinnati

I like it pretty well so far. Like with a lot of HBO shows, you have to be patient and let things develop at their own pace.

The only thing that bugs me is I don't buy that Rebecca is the grandmother of a 16 year old. That's trailer trash reproduction rate and she doesn't look trailer.

She's kind of a GILF on the show. I can't believe I even thought of that. Eww.

This just makes me wish I got HBO. I'll have to check out stuff like "Oz", "Six Feet Under" and "Carnivale" on DVDs.

HBO is great. The only show they don't have is 'Dexter' which I love. If that was on HBO, there'd be no need for the rest of the movie channels.