Gene Simmons Gets a Third Season on A&E 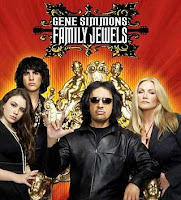 A&E has said yes to a third season of "Gene Simmons: Family Jewels," upping its order to 24 half-hour episodes from last season's 20 installments.

According to Variety, the decision was an easy one: "Jewels" is A&E's second-highest-rated series ever in the 18-to-49 and 25-to-54 adult demographics, behind only "Dog the Bounty Hunter." "Jewels" did even better in its second season than in its first, leaping by 15 percent in total viewers to a 1.5 million average and climbing by 11 percent in adults 18 to 49 and by 8 percent in adults 25 to 54.

A&E's relationship with Mr. Simmons started with a one-shot "Biography" hour of the rock legend and Kiss frontman. That "Biography" episode scored so well in the Nielsens that A&E negotiated with Mr. Simmons and "Jewels' " executive producer Leslie Grief to create a 13-episode weekly half-hour series that would delve into the rock star's life with his common-law partner, former Playboy Playmate Shannon Tweed, and their teenage son and daughter. (read more)
Posted by Dave Splash