Spare Yourself Tonight's GOP Debate and Just Read This 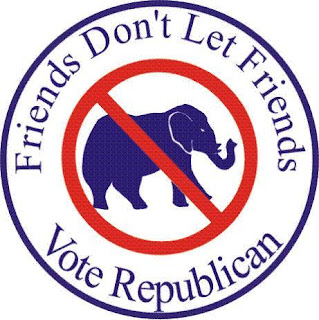 So there are actually 10 Republicans that believe they would be the best person to be president in 2008. They are all appearing together tonight for a debate. I find this inconceivable. This is the party that can't get anything right: War - failure. Homeland security - vulnerable. Economy - good for only 1% of Americans. Deficit - exploding. Military - in shambles. Constitution - undermined on a daily basis. Any Republican has a pretty tall order if they think they can make the American people trust them for another four years. George Bush has done the GOP (and the country as a whole, too) a tremendous disservice. But since the party went lockstep off that cliff, I have a tough time coming up with any sympathy.

So who are candidates that want to continue the "Bush years"? Let me sum them up for you:

John "W" McCain: Arizona Senator. See George W. Bush
Mitt Romney: Former Governor of Massachusettes. Never took a position that he wouldn't change for political expediency.
Tom Tancredo: Colorado Congressman. Hates Mexicans.
Tommy Thompson: Former Governor of Wisconsin, and Bush Cabinet member. His first and last names are too similar. Americans won't go for that.
Rudy Giuliani: Former Mayor of New York. His supposed claim to fame is his action on Sept. 11, 2001. However, the reason he was wondering around the streets of NYC on that day is because his command center was destroyed. Against the advice of federal and state officials, Giuliani kept his emergency command center in the World Trade Center, despite the first attack in 93. Sharp guy.
Ron Paul: Texas Congressman. A Republican that voted against the Iraq War. Don't give him too much credit, though. He votes "no" on everything.
Duncan Hunter: California Congressman. Thinks the Iraq War is a major success.
Jim Gimore: Former Virginia Governor and head of RNC. Claims to be the "real" conservative in the race.
Mike Huckabee: Former Governor of Arkansas. Used to be really fat. Now he isn't.
Sam Brownback: Kansas Senator. Argues that microscopic cells in a petri dish are more significant than your grandmother.

There you go. Now you don't need to watch the Chris Matthews moderated debate tonight. You can thank me later.
Posted by Dave Splash

"Ron Paul: Texas Congressman. A Republican that voted against the Iraq War. Don't give him too much credit, though. He votes "no" on everything."

No, do give him credit. Paul is one of the most anti-war politicians ever. His record, speeches, and writings for the past 30 years back up his principles. Not to mention he is in favor of civil liberties, against the Drug War, against the criminalization of victimless vices, and so on. He's way more liberal on social issues than any Democrat, and way more conservative on economic issues than any Republican. He votes "no" on most things because most things are unconstitutional BS. Here's a great article from when he was featured in High Times magazine (yes, the weed one) back in 1988: http://www.scribd.com/doc/34107/Ron-Paul-The-Pot-Candidate

So, you work for Rep. Paul?

Nope, just an enthusiastic supporter. It's funny how people that support minor candidates get accused of being paid off, when it's actually the big guys with multi-million dollar corporate fundraising who can actually hire shills.

Just checking. No accusations. Somebody has to be for the small candidates.

What a bunch of stiffs. That debate gave me a lot more confidence the Dems will win in 2008.