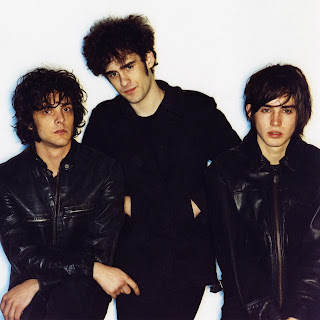 I have been waiting for almost six years to see Black Rebel Motorcycle Club in concert, and it is finally happening tonight. I have a feeling they will live up to my high expectations. The new album, Baby 81

, is incredible -- a vast improvement over the uneven Howl

from 2005. The new record mixes their older influences -- Jesus and Mary Chain, Love & Rockets -- with a little bit of the bluesier, Stones-ier stuff from Howl. I hope there is a crowd tonight at Sokol. Besides my radio show, I don't think BRMC is played anywhere in the area, and they were not featured anywhere I saw in print.

There are two openers: The Cobbs and Eastern Conference Champions. I know nothing about either. Tickets are still available for $15 and can be purchased here or at the door. If you think $15 is too high a price, I suggest you look at what shows cost people in other cities. Shows at Sokol or Waiting Room or wherever are a steal compared to NYC, Chicago, or even Kansas City. So, don't whine. It is a rare occasion to see such a great band playing a grungy basement in Omaha. Do not miss this opportunity.

This is a pretty big weekend for shows in Omaha. Besides BRMC tonight, there is also Animal Collective on Saturday, The Hold Steady on Sunday, and Minus The Bear on Monday. I already know I am going to miss The Hold Steady because I am on the air when they are playing, and I'm about 50/50 on Animal Collective. I have heard good things, but I have not personally listened to the band. It will depend on how I feel after the BRMC show.

Tune in to my show on Sunday (if you are not at THS) because I am going to be playing a bunch of Minus the Bear songs to get people prepped for Monday.
Posted by Dave Splash