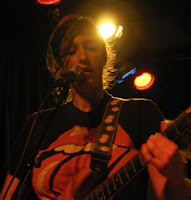 Had a great time at the Elvis Perkins / Let's Go Sailing show last night at Waiting Room. Elvis was quite good, as I expected, but so was opener Let's Go Sailing. LGS's music is slow, quiet pop with soft, dreamy female vocals. Nice stuff. I'm just now starting to listen to the CD. I talked for a while with LGS's singer Shana Levy, and she was a really nice person. Turns out, two of her band's songs were featured on the show Grey's Anatomy. I have never seen the show, but based on how many women in my office talk about it every week, I know it is a big deal. (Check out the band's MySpace page to hear some of their stuff)

The crowd was a little light, but since Neko Case played the night before in Lincoln, I think much of the normal Elvis Perkins audience wasn't willing to go out two nights in a row. What pussies. I was hungover from the night before, and I still made it out -- and drank again! No one can call me an old light weight!
Posted by Dave Splash

That was my first time at The Waiting Room. Great venue. And yeah, I was as impressed with Let's Go Sailing as I was with Elvis Perkins. I can only shake my head as some of the acts 1% books sell out at almost every location (with populations smaller than Omaha) - yet when they come here, you get what happened last night. I'm still embarassed that Yo La Tengo didn't sell out.

Yo La Tengo was at least close. I think a lot of it has to with a lack of real college or independent radio in Omaha. Sure, there is my show. But it is only 2 hours a week, and its late night. If the River played a little less goon rock, and more traditional "college rock," there might be a bigger crowd at some of those shows.