Is It Safe To Say That Hillary Won The Debate Last Night? 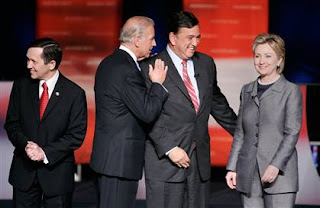 After I got home from the Bright Eyes show last night, I checked out the Democratic candidates debate which I had Tivo'd earlier in the evening. Because I was not home all night, I missed out on all the "insightful" commentary from MSNBC's political team (most of whom are Republicans).

Before watching the debate, I did catch a little of a post-debate interview that right-wing blowhard Tucker Carlson conducted with John Edwards' #2 campaign man. Of course, Tucker had to impose his view that anyone who opposes last week's Supreme Court decision regarding abortion is an "extremist." He made the same comment at least half a dozen times. Good interview technique, Tuck. Just berate anyone who disagrees with you and call them an extremist. I thought you were covering the debates for your employer and not shilling for the GOP. Are there no jobs left at Fox News for this guy? Maybe in the mail room? Something? Maybe a fill-in for Hannity?

After that interesting O'Reilly-esque interview, I played the debate. I won't give a play-by-play as there are hundreds of websites that will do that. I will say that I was most impressed with Hillary Clinton, who was able to answer questions succinctly and without the usual, unrelated storytelling that so many candidates resort to. John Edwards (who was my candidate in the 2004 election before he lost the nomination to Kerry) was more than a little bit disappointing. I did think the questions about hedge funds and his hair were unfair, but if he can't deal with them now, imagine how much worse it will be when the GOP slime machine is kicking in full gear! Edwards disappointed me in his '04 debate with Dick Cheney, as well. He is a freakin' trail lawyer and he can't be more convincing in a debate? I'm confused.

Kucinich is a goofball. 'Nuff said on him. Same with former Alaska Senator Mike Gravel. How was he even allowed on the stage? The last time he was relevant was 1971. Not sure if he should be included in further debates. I guess when compared to these two, no one can say Hillary or Obama are "too liberal."

Speaking of Senator Obama, I have been reserving judgment on him until the campaign got a little further along. On the surface, I like Obama. He's an intelligent and thoughtful guy, and he gives one helluva speech. But I have not jumped on the Obama bandwagon because of his lack of experience. After Bush, we don't need another president that requires on-the-job training. His performance last night was less than stellar. I think he is able to do better, but we will have to see. This would leave only Clinton, Biden, Richardson and Dodd.

Dodd is obviously qualified, but he is about as interesting as watching grass grow. He'd make a great cabinet member if he leaves the Senate. I have always liked Joe Biden, and I think he has the most rational plan for a post-occupation Iraq. Unfortunately, I don't think he will be able to make it. The country seems to want a change -- something new. Biden is not something new, unfortunately. Bill Richardson? Great guy. Very qualified. I don't think he is a serious candidate, though. I think he is running for Vice President to be honest. He could add a lot to any ticket, but I don't see him getting the nomination for himself.

This leaves Hillary Clinton or an as yet unnamed candidate (i.e. Al Gore). I think most of my reservations about Clinton have been in regards to electability, and not about her qualifications. I'm not sure if electability is such an issue for her anymore. The GOP is bottoming out to such an extreme degree, that she could take a few states that Gore and Kerry were unable to take. Florida and Ohio come to mind. I don't see the Democrats losing any states they won in the last two elections, and all they need to gain is one.

If Gore does enter the race then all bets are off. I would have to seriously consider Gore as my candidate. I hope the experience of his mediocre campaign in 2000 will force him to be more natural, and not so stiff and focus group tested. The guy is eminently qualified. He has been way ahead of the curve on things like the environment and the internet (though he NEVER claimed he invented the internet, he did actually introduce the first piece of legislation to privatize the arpanet) He has a great sense of humor (as displayed on his Saturday Night Live appearance), and he actually won the election in 2000. A lot of people will see him and think how much better off we would have been had the Supreme Court followed the law instead of playing politics.

Anyway....In my mind, Hillary won the debate last night, which proves that her frontrunner status is more than just in money terms. She looked presidential. Hell, even Pat freakin' Buchanan said she reminded him of Ronald Reagan! Seriously! The debate last night did not make me settle on a candidate, but it did ease some of my apprehension about Hillary Clinton.
Posted by Dave Splash

Hillary certainly won the debate. She's the best candidate by far and appeared the most knowledgable. I though Obama seemed shockingly weak on information. He seemed to be searching for an answer when asked about US allies in the world. It was as though he'd never given that question any consideration before.

OK, I didn't watch the debate, so call me an ignoramus, but I (currently) base my candidate "ratings" on their various positions. Most notably, there's that war thing, or if you prefer Borat's terminology, the "War of Terror". All of these pols made a political decision on the war in Iraq back when the chips were down. In my memory, only Kucinich was strongly against it from the beginning. Of the serious candidates, only Edwards in my mind has come clean to admit that he was wrong to support it. Hillary is the master of Clintonian triangulation. She has essentially been a cheerleader for this ill-conceived war of distraction, even as she tries to play the middle ground. Edwards' work on fighting poverty has raised his cred in my book. Obama at this point would be a great VP, but I agree with his general lack of experience. One thought: any candidate who is listening to his/her "political minders" should quit running.

Well, Dave since you missed the debate, your observations on who "won" it, are obviously a little lacking. Still, I understand where you are coming from.

Kucinich was against the war from the beginning, but the guy is a loser who was ranked in Top 3 of worst Mayors in the country when he was Mayor of Cleveland (or whatever Ohio city was dumb enough to elect him). The guy is a joke. Being right on one thing is little to be impressed about.

Edwards and Obama are impressive people, but were not very good at this, particular debate.

I used to be annoyed by Hillary's refusal to say she was wrong about her vote for the war in 2002, but I am not so bothered by it anymore. I am confused as to why this is such a big deal to my left-leaning friends. She is clearly against it now, and has stated that as president, she will end the war upon taking office. That's a solid position. Her commentary about leaving a few troops behind is conceptually sound. We will not be abandoning the Middle East, and if Iraq does become a new haven for Al Queda, we should have the ability to stop them. I guess getting Clinton the record saying "mistake" just seems like ammunition for the right.

Any Democrat that gets elected will end the war sooner rather than later. All the Republican candidates are for "stay-the-course forever," and want the war to continue. That's stark enough of a contrast for me to be comfotable with Hillary.

Politics is about compromise and looking for candidate whose ideas most closely resemble your own -- not the one whose ideas are 100% the same as your own. I am not saying I am a "Hillary guy" but I am saying that I would be comfortable with her as president.