Dana Perino Is a Bushie Fembot 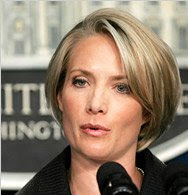 White House spokeswoman Dana Perino may be cute, but man, is she dumb. In today's press briefing, Perino asserted that she was certain that "no laws were broken" by Karl Rove deputy Scott Jennings when he gave an overtly political briefing to non-political, government employees on federal property (which is a violation of the Hatch Act of 1939), despite admitting that "I haven’t spoke to Scott Jennings about this. I don’t think that I will."

Well, how then does the fembot Bushie know that no laws were broken? Because Karl Rove said so? He's not exactly a reliable source for legal opinions considering how many investigations are currently underway about his illegal activities. Oh, excuse me, alleged illegal activities. ThinkProgress has the video here.

Of course, this is also the same woman who said that the Amercian people voted FOR the "sruge" in Iraq, despite the Bush Administration and the Republican Party getting the snot beat out of them in the election. The people voted against the surge, dear. That's why your side lost.
Posted by Dave Splash

I'm continually amazed by how the Right dismisses what transpired in November.

I know this is sleazy, but I gotta say after a few beers and maybe a blue pill...I'd bang her. Though I feel the same way about Tony Snow.