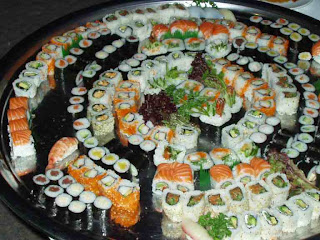 I had a pretty uneventful weekend. I've had this cold/flu thing for going-on a week now, and it is really pissing me off. But last night I felt good enough to join some friends for sushi. It will probably be the last time I ever eat at Sakura Bana since it has been bought out by Methodist Hospital. We got one of those private rooms at the restaurant, which was fun. My first time doing that (I've always eaten in the main restaurant). The food was great, but my senses were still kinda shot from being sick.

After only one drink at the nearby Holiday Lounge, I came home and watched TV. I had a lot of things saved on my DVR. First, there was the Henry Rollins special: Henry Rollins Uncut From Israel. The show was pretty good -- I like Rollins. But I was expecting a documentary on his travels through the country. Since Rollins is not Jewish, it would have had a different perspective than most of the things produced about Israel. There was a little bit of his travels, but most of the special was a spoken word performance from Tel Aviv. It was a typical performance -- funny anecdotes about his life on the road and the people he has met. It got a little corny when he advanced his theory for peace between Israelis and Palestinians. His plan called for both sides to be "bombed" with RAMONES records. Both sides would love the music so much that, apparently, they would give up all of their grievances and share their records (and I guess their land, too). Yeah, it was a little dumb. Nice try, though, Hank.

Rollins' special was followed by the season premiere of his excellent show on IFC. He interviewed Marilyn Manson (who is always a great interview), and had Peaches as his musical guest. The Manson interview was revealing in that he admitted he considered quitting music after the Columbine shootings. He was blamed by the media for the killings since both of the shooters were Manson fans. It was ridiculous for Manson to somehow be blamed for the murders, but it did cause him a lot of grief and sadness. Not the kind of thing you'd expect Manson to reveal in an interview. Peaches was okay.

Unfortunately, I fell asleep in the middle of a documentary on A.Q. Khan's nuclear proliferation network that I was watching. What I saw was pretty good, but I crashed out pretty early into it.

Not too much scheduled for today. I will definitely watch the new episodes of Sopranos and Entourage, plus I have my show at 11 tonight.

So long.
Posted by Dave Splash