What Do Ace Frehley and Al Gore Have In Common? Nothing. 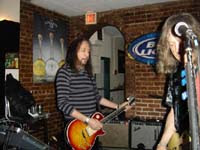 The healthy, clean, and sober (and definitely not dead) Ace Frehley was spotted out and on stage on St. Patrick's Day in a town called Harrison, NY. He played four songs with a band called Revolver who are friends of his.

Gonzo is not gonzo...yet. AG Alberto "I love torture" Gonzalez says he is not resigning because he has too much work to do protecting kids. Maybe he should leave the kids to someone else (is Mark Foley busy?) and work on protecting our civil liberties. Gonzo will go on a multi-city PR tour to try and convince someone other than George Bush that he is competent enough to keep his job.

Are Carmen Electra and Joan Jett a couple? Carmen's "people" deny the rumor, but the two have been spending an enormous amount of time together since last Thanksgiving, and Carmen is rumored to be making a "big announcement" in the near future. If this is true -- a serious high five to Joan Jett for scoring the hottest lesbian babe in America! This would also explain why Carmen Electra rejected my advances all those times...

WEEN fans take note! I have just uploaded three rare WEEN videos to YouTube. All three are from their second album, The Pod. The videos come from a Shimmy Disc Records compilation VHS tape that I found while clearing out some boxes from my parents' basement. I have a few rather obsessive WEEN fans as friends, and none of them had seen these videos before. Click the links to see the videos. 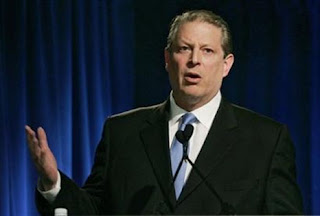 Despite Al Gore's brilliant appearance in front of House and Senate committees yesterday, I don't think he will be running for President in 2008. I have long held that Gore will run, but now I am not so sure. I do know one thing for sure, the Republicans are scared to death of him! Why else would they have such venom for a former Vice President whose last campaign was seven years ago. For that, I do know the answer. The right does not like to see Gore in public because it re-enforces the American people's belief that the wrong guy got the presidency in 2000. The media savaged Gore in the 2000 campaign. They repeated every single lie the Republicans invented about him (they still do actually, just look at the 100% phony issue of Gore's occasional use of private planes).

Gore has now been proven right in a number of areas. Upwards of 80% of the American public now believe global warming to be scientific fact, and that human activity is the primary cause. Sure there are a few deniers still out there (Sen. Inhoffe ring a bell?), but they look like ridiculous fools clinging to their 1999 talking points about "skepticism" in the scientific community. Let's put that to rest. There isn't skepticism among reputable scientists. There is consensus. That debate is over. The new debate is over how to fix the problem, not whether or not there is one at all.

Gore has also been proven right on the Iraq War. When Gore famously criticized the Bush Administration in 2002 and 2003 over their dishonest build-up to the war and its beginning, the right and the media called him "crazy." Once again, the media followed the cues of the right on Gore. But how crazy is he if he was right all along? The right-wing blogosphere, The National Review, Drudge Report, the RNC, Fox News, MSNBC, CNN, the Washington Times, and nearly all other media outlets owe the former Vice President an apology. I doubt it will be forthcoming.

The right acts so viciously and with such disrespect (did you notice that fat tub of shit Dennis Hastert refused to call him Mr. Vice President during the hearings yesterday, and kept saying "Mr Gore" instead) because all of their slimy tactics and lies will hardly work as well as they did in the past. The American people have wizened up. Gore did win the election in 2000, and should have been awarded the office by the Supreme Court. The country has a serious case of buyer's remorse now. We got a bad deal with George W. Bush.

Can you honestly say that the Iraq War would have ever happened if Gore had become President? Of course it wouldn't have. 9/11 would have happened no matter what. But in response, a Gore Administration would not have let the perpetrators run free, and focus the nation's resources on settling a personal grudge with Sadam Hussein. I imagine that a Gore Administration would have captured and/or killed Osama Bin Laden and the Taliban leadership. Al Queda would be crushed by now. American prestige in the world would still be in tact. Tens of thousands of US soldiers would not be suffering in sub standard conditions at Walter Reed with missing limbs, brain damage, or PTSD. The more than 3000 soldiers who have died in Iraq in a failed war of choice would still be alive. We would have suffered some casualties in our pursuit of Bin Laden, no doubt, but the daily meat grinder of Iraq would not be taking so many lives and limbs for no apparent reason.

Joe Lieberman would still be a Democrat if Gore had won the election. I guess that is debatable whether or not that is a good thing. The incredible Clinton/Gore economy would likely have extended into the 21st century if Bush had gone back to being a drunken Texas bum in 2000. Karl Rove? I think we would have seen him on Dateline's To Catch a Predator show. He seems like one of those sick, lying pervs to me. The extremely wealthy would still be quite rich, but the middle class would not be suffering to such an extreme degree.

I could cite a million other ways we would have been better off if the man who got the most votes in 2000 had actually become President. I think most Americans are in agreement with me on this, and that is why the Republicans were so vitriolic towards Al Gore in yesterday's hearings.

Historians will look back on this period (the Bush years) with shock and disappointment. They will write about the media's enabling of this failed president, and their shocking level of bias against those who spoke out against Bush, Cheney, and the war in Iraq.

But having said all of that, I am still unsure that Gore is going to run again. He now enjoys a certain prestige that eludes most politicians. He is the "Gore-acle." He is an Academy Award winner, and a nominee for a Nobel Prize. Does he really want to endure a swift boat style attack on his character? I think he could withstand the attacks and rise above them, but I certainly understand why he would rather remain in the private sector. I hope I am wrong on this point, but I am increasingly coming to believe that I am not.
Posted by Dave Splash

You know, after yesterday I really do believe Gore won't run again. I think he's serious about the issue of Global Warming and he realizes the GOP's hatred of him is only going to hamper his efforts to warn people what's coming.