No Peace No Pussy 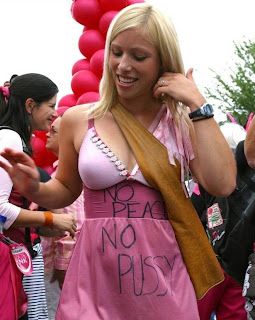 The House of Representatives passed an appropriations bill for the war in Iraq today that contained a binding timetable for ending the war and bringing the troops home. The bill passed 218-212. Within an hour, our pathetic excuse for a Commander-in-Chief was on television with a "military family" by his side denouncing the bill, and making the false claim that this "emboldens the enemy." Of course Bush did not explain how exactly, and how this "emboldening" is different from all of the other emboldening that Bush, Cheney, et al have been claiming for years. I mean, they said that electing Democrats was emboldening the enemy, too...What I find curious is how the right is criticizing this for being a binding measure. Over the last two months, the right has claimed that if the Dems were sincere about ending the war, they would not attempt to pass a non-binding measure, but pass a binding one. Now they have. You asked for it, you got it. This bill will not likely become law because even if it got through the Senate, the President would veto the bill (something he has not done in 6 1/2 years as president). True. But it took nearly 30 tries before Congress was able to finally end the Vietnam War, so this is only the beginning. I hope the "Out of Iraq Now" types understand that this is an incremental process.

Two of the top Republicans running for President are giving the finger to Black America. Both Rudy Giuliani (who has a long history of problems with the African-American community) and Mitt Romney have declined invitations to speak at the annual convention of the Urban League. The Urban League is a non-partisan organization. President Bush has spoken there three times, Al Gore did in 1999, and John Kerry did, as well, in 2004.

Continuing with Giuliani, it was revealed today that Rudy's third wife, Judith Nathan, has actually been married twice before -- not once as she has been claiming for many years. No word on whether or not Ms. Nathan married her 2nd cousin as Rudy did in his first marriage. 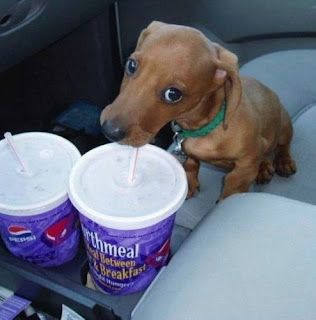 If you are pet owner you have, no doubt, heard about all of the recalls on pet food. From what I understand, the food was tainted by rat poison. Dry foods were not effected, but many pouch or "wet" types of food were. Fortunately for me, I give my pets dry food. Much of this food was manufactured in China which I find problematic. I understand companies like Iams and Purina want to make as much money as possible so they have their factories in places like China. But many in China eat cats and dogs so you can't really expect them to exercise the same level of care that others might. If your cat or dog is behaving strangely or being unusually lethargic, take him or her to the Vet immediately.

A new British study has ranked a number of drugs in terms of their level of danger to people. Heroin and cocaine were at the top of the list. Marijuana was #11, which is a lower number than both alcohol and tobacco. This, of course, reinforces the notion that marijuana prohibition is based on things other than science.

If you are not already completely disgusted by Michael Jackson, you will be after seeing these pictures.

Sorry for that Jackson link. To make it up to you, I will link to these great on-set shots of the always stunning Winona Ryder.

As I'm writing this post I am making a DVD of an old Jane's Addiction concert video from 1990. Man, those guys were fuckin' great back then!
Posted by Dave Splash

My God, it looks like Tito's son has already had some plastic surgery!

That picture is really frightening.

Purina voluntarily recalled Mighty Dog Pouches that were made at the Menu Foods factory in KANSAS,,,,no Purina factories in China!

Thanks for presenting the pro-Purina side of the argument. But pointing out that Purina has a factory in Kansas is not really relevant considering the animal deaths were caused by tainted wheat purchased from China. The US grows tons of wheat. I bet some is even grown in Kansas. But I doubt Kansas farmers protect their wheat with a poison that is toxic to cats and dogs.

Personally, I don't feed my cats Purina food because they don't like it. They are the deciders.