Rita Cosby is out at MSNBC. Thank you, lord! I HATE that scruffy voiced she-devil. Send her back to Fox!! She has absolutely no measurable talent, and she is not even good looking. If you are going to be a TV airhead, you need to -- at least --be hot.

R.I.P. Richard Jeni. The comedian committed suicide over the weekend. He was 45. Why do so many comedians kill themselves? How sad.

There are plenty of reasons to hate France -- their complete lack of loyalty to their friends and allies, their cultural elitism, their awful food -- but the increase in anti-semitic activity is the most alarming. According to French Jewish groups, anti-semitic attacks rose an alarming 46% in 2006. The French government has refused to acknowledge the problem because it does not wish to upset the easily excitable French Muslim community. Considering how quickly the French sold out their Jewish citizens in WWII, I don't see their government doing anything to correct this situation. The Miami Herald is reporting that many French Jews are leaving the country and moving to Florida. 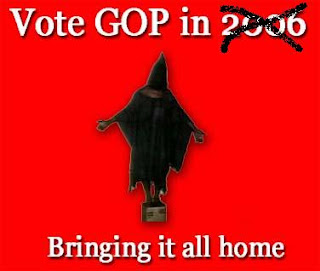 The GOP Presidential candidates continue to provide nothing to get excited about. The "top tier" of candidates -- Giuliani, McCain, Romney -- are virtually unelectable due to their "liberalism," closeness to Bush, or flip-flopping. So, television star and former Senator Fred Thompson says he is considering a run for the White House. Great, another empty suit actor in the Oval Office. Didn't we learn our lesson on that already? Nebraska's Chuck Hagel wasted every one's time this morning with his non-announcement announcement that he might run someday in the future. Some liberals have expressed support for Hagel because he is so outspoken on the Iraq War. Not this liberal, however. Hagel is as far right as they come, voting with Bush 96% of the time -- the highest of any US Senator.

Ooops. Israel's ambassador to El Salvador has been recalled after a rather embarrassing incident. He was found by police tied up, with a ball gag in his mouth, wearing other bondage and S&M attire, in his yard. Israel has recalled him for "behavior unbecoming a diplomat." I'd say so. 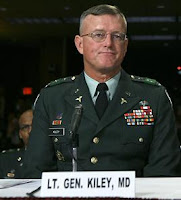 Army Surgeon General, Kevin Kiley, has resigned due to the Walter Reed scandal. He may be demoted a rank in retirement, as well. Good riddance. Yet Donald Rumsfeld's pension will never be touched, and he is still lionized by the right.

As much as I hate the media, there is some quality journalism being done out there (Dana Priest's exposure of the scandal at Walter Reed for example). An article in the Minneapolis Star-Tribune details how quality, substantive journalism is doing well. Ratings for NPR and The News Hour with Jim Lehrer are rising as ratings in cable news are on the decline. When the media devotes more time to Britney and Anna Nicole than to Iraq and government corruption, it deserves poor ratings.

Disney is apparently quite upset about a pornographic comic featuring Keira Knightly having sex with Johnny Depp and Orlando Bloom in the Pirates of the Caribbean setting. The comic company is called Sinful Comics and some of the uncensored images can be found here. (NSFW)
Posted by Dave Splash

It's good to hear Rita Crosby got the boot. She is so annoying.

The comic was very generous to Keira Knightley. In real life she has a beautiful face but no boobage whatsoever.