My Word, Is It Thursday Already?

The Jesus Lizard were one of my favorite bands of the 90s, and were easily one of the best live bands I have ever seen. A new live DVD of a Boston concert from 1994 when the band was at the peak of its awesomeness (is that a word?) is scheduled for release by MVD on June 5. The disc also features some bonus live footage from 1992. Order it here.

OUCH! You know you're screwing up in the Middle East when Saudi King Abdullah attacks you. At this year's meeting of the Arab League, the Saudi monarch (a close friend of the Bush family) said that W's war and occupation in Iraq is "illegitimate." This is unprecedented. A Saudi royal not getting what he wants from a Bush?

Sticking with Bush for a sec, the doofus-in-chief cited an unnamed "blogger" as a source for him to make the claim that things are great in Iraq, and that it is now pretty much like Phoenix with turbans. Take that, "reporters"! Hmmm, if the president can cite unnamed bloggers to make any case he wants to, then I want someone to cite me as the source for this: "the unknown, incredibly handsome 36 year-old seen on the arm of Charlize Theron recently is a Nebraska-based blogger who writes for The Dark Stuff" You can quote me on that!

Awwwww, ain't that sweet. Rudy Giuliani has announced that he'd like to have his third wife sit in on cabinet meetings if he were to become president. Mrs. Giuliani has some training as a registered nurse, but I'm not exactly sure how that qualifies her to be an adviser to the President of the United States. Before you right-wingers cite Hillary Clinton as an example of a First Lady with a policy role, Mrs. Clinton was a lawyer in the private sector and for the US Congress during Watergate. She was more than qualified to be an adviser, unlike the third Mrs. Giuliani. 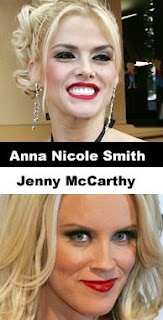 TMZ.com conducted a survey of its readers to see who they preferred to star in the inevitable Anna Nicole Smith movie. Former Playmate and MTV star Jenny McCarthy won hands down. Unfortunately, that is not the part Jenny wanted to play. Last night on Jimmy Kimmel's show she confesed that she'd rather play some whackjob friend of Anna's named Bobby Trendy.

More success in Iraq. Today, two bombings in Baghdad killed more than 90 people. John W McCain, who two days ago said Baghdad is safe enough to walk around in without any security, could not be reached for comment. Joe Lieberman questioned the patriotism of the person who asked him to comment.

I used to really like and admire Harold Ford Jr. I supported him (to the extent that I could not living in Tennessee) when he was running for Senate last year. But I can no longer really count myself among his supporters. His new job at the DLC, and many of the opinions he's stated since his election loss last year have really troubled me -- especially in regards to the Iraq War. DailyKos has dubbed pro-Iraq War Democrats (or former Dems), Liebercrats. Ford, like Lieberman, echoes the right-wing talking points on Iraq, and has been consistently arguing against the very mainstream positions taken by the new Democratic majority. What happened to you, Harold? Listening to play-it-safe, Republican-lite Democrats is what gave us George Bush as president. We don't need any more of those.
Posted by Dave Splash

Thank you so much for visiting Morning Martini. Please know you will always be welcome.

If you want the scoop on those bloggers bush talked about visit Crooks and Liars. They have a post about who they really are.

I even checked out the blog he was talking about. I heard on Keith Olbermann that it is two Iraqi dentists that write the blog, and that the two have been guests of the president at the White House. That's a prima facia case for bullshit right there!

Ahhhhh, David Yow! What an imaginatively degenerate performer! I have a couple of Jesus Lizard bootleg cassettes from about 10-15 years ago that I need to convert to CDs. Love that stuff... in one of them he is making lewd comments to waitresses, etc. "Lash" is the only CD of theirs I have, but it's like an EP. I need to get "Goat" and a couple of their others. Do you have any particular favorite?

Lately I have been playing the new Arcade Fire CD "Neon Bible" to death... I think it totally blows "Funeral" away. I like the Montreal scene... my daughter turned me on to a band called Malajube that is quite good, sings all their stuff in French. I'm also a big fan of The Dears. I think that might be a fun city to live in and go clubbing in.