My Tuesday Contribution To The Blogosphere 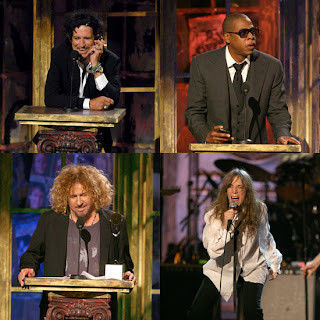 The Rock and Roll Hall of Fame induction ceremony last night was a total disgrace -- a complete waste of time and effort. There were highlights, of course, but they were few and far between. Patti Smith and R.E.M.'s inductions went well, but the rest were quite disappointing. The Van Halen situation was the worst, by far. They were inducted by the band Velvet Revolver who clearly spent no more than 30 seconds preparing their remarks. To celebrate a band's 30 year career by simply saying, "Eddie is a great guitarist" is insulting to the band and to the people who wanted to see a bit more "depth" in the discussion of such an influential band. The fact that only former bassist Michael Anthony and former singer Sammy Hagar were present to accept the award was even more disappointing. Eddie Van Halen is in rehab, but where was Alex Van Halen? What about Eddie's son, Wolfgang? Were they too busy? Original singer David Lee Roth was planning to attend, but cancelled when the Hall Committee told him the only song he could perform is "You Really Got Me." Yes, Van Halen did a version of that song, and it is very well known. BUT IT IS A KINKS SONG!! Allow the guy to perform his own freakin' song for crying out loud. He wanted to sing "Jump" instead.

Patti Smith got all emotional when accepting her award, and she channelled that into a strong performance. While I would have preferred her to do some other songs of hers, she did a pretty strong version of her controversial classic, "Rock and Roll Nigger." Grandmaster Flash became the first rap artist inducted into the Hall, and it was nice to see him get the accolades he deserves. R.E.M. was inducted by Eddie Vedder of Pearl Jam who wrote a great speech. The band performed along with their old drummer who left the band a decade ago. They performed two of their own songs, and then did The Stooges' "I Wanna Be Your Dog" along with Patti Smith. Was this a statement on the omission of Iggy Pop and The Stooges from the Hall? And why hasn't KISS been nominated yet? They have been eligible since 1999. The Rock and Roll Hall of Fame serves a good purpose, but it seems the politics of who gets inducted is leaving many deserving artists behind. You can watch the show on demand here.

The Iranian government has stated that the new film, 300, is an insult to Persian culture. I think I'll go and check it out after work today!

OMG! An atheist in Congress?! How will the nation survive? Rep. Pete Stark (D-CA) has stated that he does not believe in a "supreme being" and considers himself a Unitarian. Expect the right-wing to attack Stark viciously for exercising his First Amendment rights.

The only Western journalist still stationed full-time in Gaza, the BBC's Alan Johnston, has been kidnapped. He has been in Gaza for three years.

The new owner of Air America Radio has extended an offer to four state chairs of the Republican Party to host their candidates' debate. Hmmmm....After the hissy fit the right has thrown because the Democrats pulled out of the Nevada debate sponsored by Fox News, I thought the GOP would jump on this sincere chance for their candidates to be able to express their views to a new audience. And since, according to Fox, Democrats are Nazis because they refused to debate on Fox, I guess this means Republicans are Nazis if they decline the offer from Air America.

Paul McCartney's horrible mistake of a marriage to that gold digging she-devil Heather Mills will likely end up costing him $56 million. The two have apparently reached a settlement. This is horrible. McCartney should not have given her a nickel. She is rumored to have asked for $20K per day for "necessities." What a bitch. 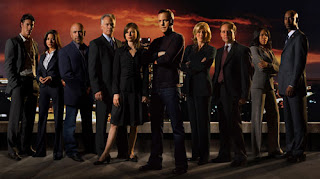 Last night's episode of 24 is the first one I have felt like commenting on in a while. I have been somewhat disappointed by this current season (and I am not the only one from what I hear). Last night, however, the show began returning to its classic greatness. Bringing back disgraced President Charles Logan (the George W Bush of the TV world) was a genius idea. Naturally, he was not able to accomplish anything with the Russian consul (who he collaborated with in the crimes that forced him from office). But when the idea was floated that Logan's unstable wife, Martha, should personally call the Russian First Lady in an attempt to get the consul to surrender peacefully, I knew things were going to get interesting. I wasn't sure how interesting, though. When Mr. Logan arrived at her "institution," he quickly found out that his ex-wife had taken up with former Secret Service Agent Aaron Pierce (who was always a great guy). Pierce convinced Martha to talk to Logan, and to call the Russians. But before she could make the call...she stabbed Logan in the neck! WTF!? I was definitely not expecting that! She then said she should be given a medal for getting rid of the "world's greatest criminal." Logan's status is unknown. He was rushed to the hospital, but it doesn't look good for him.

Vice President Daniels is, without a doubt, written to resemble Dick Cheney. With President Palmer incapacitated, he is now in charge. He pulls the very Cheney move of threatening to annihilate some Arab country for their nuclear attack on the US and the attempted assassination of Palmer, despite knowing with 100% certainty that they are not responsible. Sounds an awful lot like attacking Iraq in retaliation for 9/11 when they had nothing at all to do with it. I am still holding out hope that Chief of Staff Lennox will do the right thing, and expose the VPs role in the attack on the President. He's a mixed bag, so I don't know if he will come clean.

Not too much else to mention about the episode except for the introduction of Rick Schroeder to the cast. He plays a CTU agent named Mike Doyle. So far, he seems pretty good. I'm sure he and Jack Bauer will work well together. I am now back into this season, so I can't wait until next week!
Posted by Dave Splash

Yeah, I'd love to hear an explanation why some artists seem to be blacklisted when it comes to the Rock 'n Roll Hall of Fame.

They don't offer an explanation. They are the deciders, and the rest of us should just shut up and be happy.