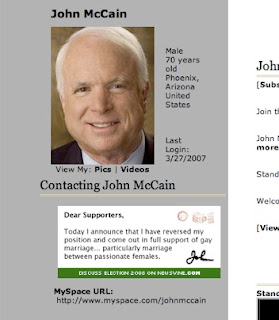 Republican presidential candidate John W. McCain's MySpace page was hacked recently. Sort of. The "hacker" posted a fake message from the former maverick that said he had changed his position on gay marriage, and is now in favor of it -- especially between "passionate females."

According to the TechCrunch website, McCain's page used a popular code that is open to the public. The code's creater gives the code away for free, with the only caviat being that the user must give him credit for it. McCain's MySpace page designer refused to give the proper credit, and did not host their own images. They were using the code designer's webspace to host their images (this is a big no-no in internet land). So, the code designer simply replaced one of McCain's images (which were on his web space mind you) with the image that had the gay marriage message. It has now been changed back to its original form.
Posted by Dave Splash