It's Friday! Dig Out Your Car and Let's Go Out! 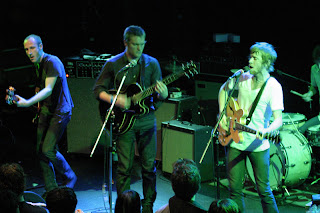 There are a lot of shows happening this weekend in the Omaha area, but only one that is worth mentioning as far as I'm concerned. Saturday night, March 3rd, California's Cold War Kids will be playing at Sokol Underground. I don't know a ton about these guys, but their CD Robbers & Cowards is a really unique and electic rock album. I first heard of them because a year or so ago they released a covers EP that included a version of Fiona Apple's "Fast As You Can." Any rock band that covers Fiona is okay in my book. Tickets are $12.

Remember the "outrage" from the right when Barack Obama said that soldiers lives were being "wasted" in pursuit of a failed policy in Iraq? Conservatives said Obama hates the troops, is unpatriotic, etc, etc...Well, why no outrage when John W. McCain says the exact same thing on the David Letterman show? Obviously, because he is a Republican, and they are not held to the same standard in the media. Duh.

Yoko Ono has finally admitted that she ruined John Lennon's career (oh and that he ruined hers, whatever that was). She says in a new interview, "In a way, both John and I ruined our careers by getting together, though we weren't aware of it at the time. "My initial reaction to rock music was, 'Oh dear, how simple can you get?' At first I thought John would carry on with The Beatles and I would do my own things, but he felt it wasn't right that we were working separately, that the union we had might not last, because of the pressure of the world." 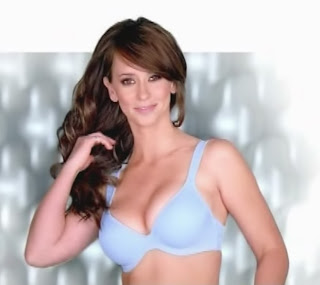 Usually when celebrities endorse products, I ask myself, "Why in the hell would anyone care if _______ uses that product? He/she is an actor. Endorse something you know!" Well, Egotastic has found the perfect celebrity endorsement. "Actress" Jennifer Love Hewitt is now the new spokesmodel for Hanes bras. She is, without a doubt, a good fit for the company. Her entire career is based on her breasts! I couldn't even tell you a single movie or show JLH has been in, but I know her the second I see her. That is good branding!

Did you notice a little less Paris Hilton in the news in the last week? The Associated Press tried a little experiment -- no Paris coverage for one week. Wouldn't you know it, there was something else to cover! OMG! "None of the thousands of media outlets that depend on AP called in asking for a Paris Hilton story. No one felt a newsworthy event had been ignored." 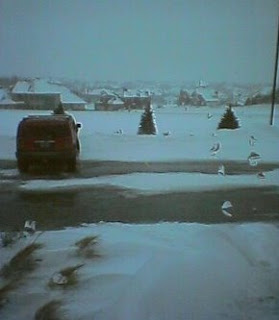 We have been dealing with blizzard-esque conditions here in Omaha for the last two days. This is a picture I took out of my office window today (yes, I am working). See, it looks like shit out there! But, I just realized something...I didn't get my mail yesterday! There was nothing, and I don't think it was because I just didn't get anything sent to me that day. I always get mail. Whether it's a bill, or one of the dozens of magazines I subscribe to, or even a CD being sent to me for my radio show, there is always mail for me. So, this raises the question, "Did the post office take yesterday off?" I thought they always delivered. Even through, rain, sleet, snow, you name it. Guess not anymore!

I just learned something interesting! I have been listening to the new CD by Elvis Perkins called Ash Wednesday a lot lately. It's great, by the way, but kind of depressing. Elvis' father was actor Anthony Perkins (Psycho) and his mother -- also an actor -- was in the plane that hit the north tower of the WTC on 9/11. He's had a depressing couple of years. Chromewaves has posted some mp3s and has some links to articles on Mr. Perkins. Take a few minutes to check him out.
Posted by Dave Splash

I can tell you that I will certainly be paying much closer attention to Hanes ads from now on. Whew...

I've often thought the name of JLH's show should be changed to the Breast Whisperer.