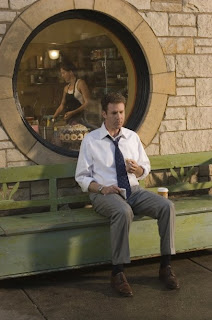 I decided to skip the Little Brazil CD release show last night and watch a movie at a friend's house instead. My friends (a married couple) bought a new, large flatscreen TV and a surround sound system. It was nice, but I would have gone a little bigger. Anyway, we watched Stranger Than Fiction with Will Ferrell. What an amazing movie. I am a huge Will Ferrell fan, but this was nothing like any of his previous starring roles. He was still funny at times, but for the most part, this was a more serious role. I was thoroughly impressed with him.

There is no real reason to give a play-by-play of the movie. You should see it yourself. But I do think this was a pretty original concept for a movie. A seemingly normal man, a lonely IRS auditor, begins hearing a woman's voice in his head. It's not telling him what to do, it is narrating his actions. No one else hears this voice, and at one point, the voice mentions his imminent death. This sets off a chain of events that changes his life and the life of the narrator who is telling his story. 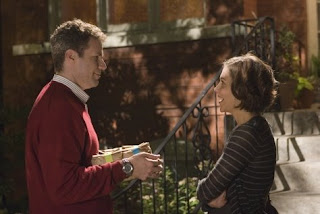 Ferrell meets a bakery owner (played by Maggie Gyllenhaal) who he is scheduled to audit. Though she has extremely hard feelings toward him, over the course of the audit, Ferrell's behavior and attitude change, and the two become close. I can't really say much more without giving away too many important plot points. Dustin Hoffman and Emma Thompson also star in the movie.

I wholeheartedly recommend this film. If you are not pre-disposed to like Will Ferrell, your opinion of him will likely change. I really liked Maggie Gyllenhaal, as well. Stranger Than Fiction made me happy and it made me think. That is rare in movies these days. The soundtrack was pretty cool, too. Lots of Spoon, and I even heard The Jam at one point. A real highlight of the movie for me focused on a little known 70s new wave song called "Whole Wide World" (by Wreckless Eric). It was a touching scene, and one that really hit a nerve. Great movie.
Posted by Dave Splash

Email ThisBlogThis!Share to TwitterShare to FacebookShare to Pinterest
Labels: Stranger Than Fiction, Will Ferrell

Isn't it funny how a lot of times you end up liking comedians more in dramas? That's the way I am with Adam Sandler. Maybe it's because so often they're just better movies.

I agree on Sandler. I actually dislike Adam Sandler, but he was really good in 'Punch Drunk Love.' Jim Carrey was the same way. I used to hate him until stuff like 'Truman Show' and 'Eternal Sunshine...' But I've always liked Will Ferrell and now I just like him even more.