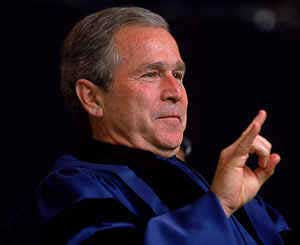 I'm not sure how seriously you should take this study, but a team at the National Academy for Gifted and Talented Youth at Warwick University in England claim that smart children prefer hard rock and heavy metal to other types of music. This, obviously, explains the popularity of Pantera.

White House Press Secretary Tony Snow's cancer has returned and spread to other parts of his body. Obviously, this is bad news for him and his family. Will Rush Limbaugh, Brit Hume, and other right-wingers accuse the Bush White House of using Snow's cancer to get "sympathy support" for their scandal plagued administration? Oh wait, cancer is only a bad thing if it happens to a conservative. If it happens to a liberal it is just another political opportunity, right? For what it's worth, I hope Snow recovers quickly.

This is just too rich! David Stockman, budget director under President Ronald Reagan, has been charged with defrauding investors and banks of $1.6 billion. Let's see if Alberto "see no evil, hear no evil" Gonzalez fires the US Attorney in charge of the case before this goes too far. The firing would be for "performance reasons" of course. 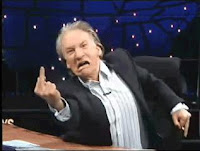 Bill Maher is interviewed in the new issue of Playboy (April 2007). Money quote: "Barack Obama is exciting. Everyone says he is a rock star, which is one of the most overused phrases these days; everybody's a rock star. You know what? If you're not getting blown after the event, you're not a rock star."

Attention Rudy Giuliani! If you are going to change all of your positions to appease the farthest of far-right nutjobs, you should at least brush up on which Constitutional Amendment gives right-wingers a boner. (Tip: it's the 2nd) On Sean Hannity's radio show, Giuliani said, "I support the First Amendment right to carry and bear arms." It's no wonder this guy's poll numbers are going up among Republicans. The less you know about the Constitution the better if you are a Republican.

Interesting. Slayer and Marilyn Manson are teaming up this summer for a co-headlining tour. Manson will have a new album released before the tour, and Slayer will be celebrating their 26th year as a band.

George P. Bush, nephew of the president, has enlisted in the Naval Reserve. Good for him. But until I see his ass shipped off to Iraq, I'm not buying it. George P. will likely get the same cozy arrangement that his uncle got -- protecting Alabama from the terrorists.

Dinosaur Jr's first new album with the original line-up since 1989 is scheduled for release on May 1. Here is a new song called "We're Not Alone."