Hate The Sin Not The Sinner? Yeah, Right!

This is an email sent by a military recruiter to someone who did not want to join the military because of its ban on gay people. 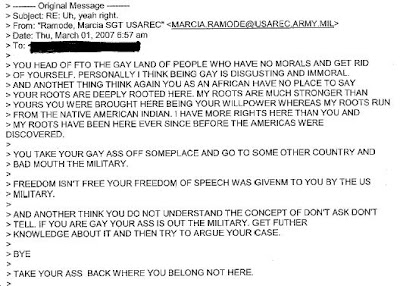 I'm sure that the attitudes of this particular military recruiter are not held by everyone in the military, but I imagine that many of the highest ranking service members do, in fact, share it. The above email is a logical extension of the prejudicial ban against gays serving in the armed services. In addition, when you have the highest ranking person in the entire military, Joint Chiefs Chairman Peter Pace, expressing the same sentiment (although in a much more tactful way), it sends the message to the lower ranks that it is okay for them to express this kind of hatred and bigotry. I hope the right will not defend this type of hate speech and will demand the resignation of this recruiter. But considering the right's "tolerance" for bigotry among their ranks, I doubt this will happen. (Read more emails from this recruiter here)
Posted by Dave Splash